The A to Z of Fiction to Reality: Virtual Reality

Back in the mid-80's, on a trip to (the one, true) Six Flags, I had my first encounter with virtual reality. They had a station set up where you could experience it yourself for the low, low price of $10 (or something like that). You put on a set of VR goggles, walked on a treadmill, and shot at things. What made it interesting is that they had a monitor set up so that other people could see what you were seeing. There were obstacles that you had to dodge; some of them would fly out at you suddenly, so it was amusing to watch as the people doing the simulation would duck and, um, sometimes, actually fall down because they were caught off guard by something. I didn't actually do the thing, because I didn't want to spend $10 on something that lasted two minutes, but I had a couple of friends who did; one of them even did it twice. They were very impressed and said it felt like they were right there with things flying at their heads. It was, of course, the '80s when the idea of virtual reality really leaped into popular awareness. Right along with the personal computer. Of course, back in the '80s, we all thought we'd be in a virtual world by this point.

But how far back does virtual reality go?

Well, that's an interesting question, and I'm going to answer it from two perspectives:

First, in the 1950s, Morton Heilig decided that going to the theater should  be a fully immersive experience. He began working on his Sensorama which finally came out in 1962. The only piece ever produced was of the viewer riding the streets of Brooklyn on a motorcycle. It was much more than 3D, also providing the vibrations of the motorcycle, the wind on the face, and the smells of the street as the viewer "rode" along. However, the cost of producing the 3D films was just too high, and the Sensorama failed to catch on. 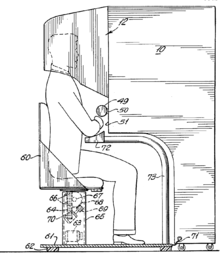 But what we think of as virtual reality really was a product of the '80s and stemmed almost solely from the work of Jaron Lanier. He founded VPL Research in 1985, which is the company that produced the famous goggles and gloves that we all think of when we think of VR.

The biggest issue with VR at the moment is that it's actually much more advanced than we realize. Quite advanced, in fact, within the medical field and the military. I suppose the high cost of VR systems is still keeping it out of the consumer market.

Except in one thing... the building of virtual worlds. The video game industry has become adept at creating worlds, and there have been some amazing strides in that area in recent years. The one I think is the most important is the development of the virtual world in The Force Unleashed. It's the first game world to apply "real" physics to the environment rather than just having the same programmed response every time. Here's a short video that talks about it a bit (although this one is not as good at explaining the significance of what they're doing as the couple I saw back when the game was first coming out, but I couldn't find those):


Some of this technology is related to the stuff ILM developed for Peter Jackson for The Lord of the Rings so that the armies would behave... well, autonomously instead of having groups of soldiers all doing the same thing.

So that's kind of where we are, right now, but from where did all of this come from from a fiction standpoint?

For that, we're going to go back to 1935 and the short story "Pygmalion's Spectacles" by Stanley Weinbaum. In the story, a professor has invented a pair of goggles that allows you to experience a movie as if you were in the movie including interacting with the characters. How familiar does that sound?

Remember Stanislaw Lem (from this post)? Well, in 1960, he had a short story, "IJON TICHY'S MEMORIES," in which a scientist creates an entire virtual world (and, evidently, traps people within it). Trapped in this virtual world is another scientist who creates a virtual world. Yes, within the first one.

And, of course, there's William Gibson with Neuromancer, which I find to be less of virtual reality, as such, and more just a visual representation of cyberspace, even if it is a virtual world.

We also have to jump right back to this post about Snow Crash.

In movies, we have Tron and The Matrix as two of the best examples of virtual reality in fiction.

For me, there was Tad Williams' Otherland series. Virtual reality is to the point where people have jacks implanted in the base of their skulls so that they can plug directly into the virtual network and experience everything by having their brains directly stimulated. It's interesting, though, in that during the course of the books, he shows us how the technology evolved in the world he created. What's interesting is that some of our newest advances in virtual reality have an eerie resemblance to antiquated VR tech in his books. 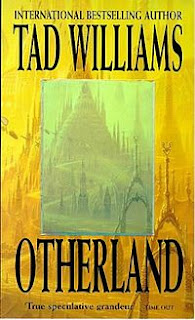 Here's what it comes down to for me:
When VR becomes a thing that people can enter into and experience as if it was real life, people will not want to leave it. There are already issues with people and the virtual worlds they already have access to, and these worlds are not... well, we don't experience them as if they are happening to us. But there have been cases of child neglect and abuse from parents becoming too immersed in these worlds. There have been cases of people going without food or water to the point of death. And these are just worlds that you experience through a keyboard. Imagine what it will be like when you can have full sensory input. Feel things. Smell things. Even taste things. And it can be better than your life in the "real" world.

[Oh, and I did some more digging, and I found the other videos I was talking about.]