The A to Z of Fiction to Reality: Flying Cars

There may be no better indication that the future has arrived (when it does arrive) than that there will be flying cars sitting in people's driveways. As with driverless cars, the idea of cars that can fly has been around almost as long as cars have been around. But, then, the desire for flight goes back thousands of years. All you have to do is flip through Greek mythology to find stories of Man riding flying horses or Man making wings from feathers and wax to know that man has always wanted to fly. It's no surprise that we want our cars to fly, too.

It may have been The Jetsons, though, that really embedded the idea of the future and flying cars into our psyches.

What kid growing up watching this cartoon didn't want one of these? Well, maybe not precisely one of these, but a car that flew, nonetheless.
George Lucas didn't help when he created this

even if it doesn't quite fly.
And we can't forget 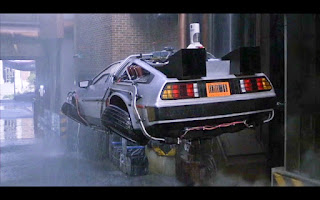 However, it was probably the movie Blade Runner that really sealed the deal and presented us a future vision, even if it was a bleak future vision, of a world with cars that fly: 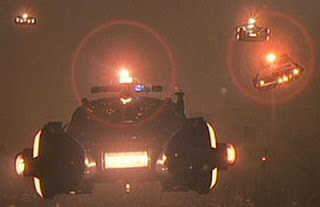 It's been a while since I read Do Androids Dream of Electric Sheep?, but I'm pretty sure the flying cars are in the novel, too. Almost positive.

The thing is... flying cars are here. They sort of have a mythical quality to them, right now. You hear about this company or that company working on them, promising them, but they never seem to be quite available, so everyone seems to think it's just one big scam. I think it's really a matter of the government, though. And, probably, the airlines. I mean, if people can own flying cars, we won't really need airlines so much anymore, will we? Maybe for international travel. For a while. At any rate, several companies have fully functional flying cars ready to go, but there continue to be, and pardon the pun, roadblocks at every turn.

This is my favorite one: 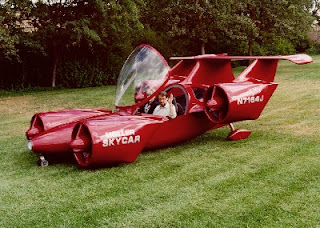 That's the Moller Skycar M400. It has vertical take off and landing, can go 400mph, and has a 900 mile range. It even gets around 20 miles to the gallon, which isn't bad considering our old van barely got that. The real issue? The $1,000,000 eventual price tag. They do have a four-seat model, though.

A model more likely to be ready for the general public within a reasonable time frame is The Transition. I believe a pilot's license is required, though. You can find out more about it here. 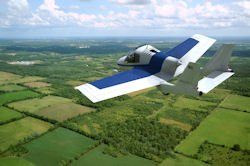 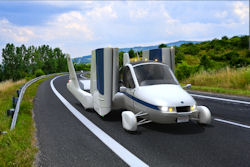 ﻿This is a future I really expect to see in my life time. I hope. The whole flying car thing just seems to have gotten bogged down in government red tape. But they're real. They work. They just cost a lot of money. And, well, they're not really legal, yet.
Posted by Andrew Leon at 10:55 PM

Email ThisBlogThis!Share to TwitterShare to FacebookShare to Pinterest
Labels: a to z, Back to the Future, Blade Runner, flying car, future, Jetson, landspeeder, Star Wars