The A to Z of Fiction to Reality: the Internet and the Invisibility Cloak

Today, you get a double dose of incredible science that has come from fiction. Why? Because I just couldn't make up my mind between the two. Not the things themselves necessarily, but they stories behind them.

Not to get too detailed, but Internet research goes back into the 1960s. However, it wasn't until the '80s that it really began to develop. Before people really knew about it, it was already becoming a huge Idea in science fiction. William Gibson latched onto it so early that his ideas about what the Internet would or could become in such works as "Johnny Mnemonic" and Neuromancer are completely indistinguishable from the development of the actual technology to such an extent that he's often credited with the actual Idea for the Internet. It's impossible to distinguish how much of an impact his early writings may have had on the development of something that was barely even begun, so there may be truth in that. We also have to acknowledge the movie WarGames (1983) which is the first movie to really put the Internet in our faces (as well as AI (see this post)). 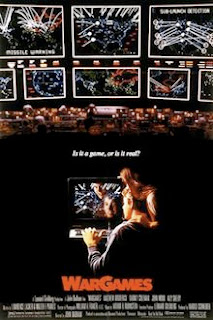 That movie gave my mother nightmares for weeks.

But let's take a step back... back to the end of the 19th century and a man by the name of Samuel Clemens. Clemens was fascinated with science and technology. He even wrote a novel about time travelling and was great friends with Nikola Tesla. The two spent great amounts of time together in Tesla's lab. Of course, Clemens is better known to us as Mark Twain.

In 1898, Twain wrote a story called "From the 'London Times' of 1904" in which he has a device called the telelectroscope. The device is based on the telephone, which was still a new thing and fairly rare, and allowed the user to view and interact with people all over the world. The Internet. In fact, the telelectroscope made the daily doings of the globe "visible to everybody, and audibly discussable, too, by witnesses separated by [any amount of distance]." That sounds a lot like facebook and skype and... well, any number of other things.

So... yeah... Mark Twain dreamed up the Internet and social media. And he hung out with Tesla. We really don't know what all Tesla was into, but Twain wrote a story about time travel. It makes you wonder how he might have had an idea about the Internet. Just sayin'.

And, now, the invisibility cloak:

After flight, invisibility may be man's longest running fascination. To be unseen. From a literary standpoint, we can look (again) to H. G. Wells. The Invisible Man (1897) takes a remarkably scientific stance in its approach to making a man invisible. There is no "magic potion" here, just optics research that results in a man being made to be invisible. With disastrous results. The end of the 19th century seems to be full of warnings about messing with science that isn't really understood. [Except for Twain's Internet story. In that one, technology is used to solve a murder.]

Invisibility and the quest for invisibility was a familiar theme throughout the 20th century in both literature and science. It includes, but is not limited to, the One Ring in The Hobbit and The Lord of the Rings, any number of super hero stories and movies, and, recently, Harry Potter. In the Harry Potter, invisibility takes the form of an invisibility cloak.

And how cool is that? Because, unlike flight, anyone can use an invisibility cloak. No skill involved.

So... science has been looking at ways to make things invisible for a while now. Since World War II, at least. We can make objects (like airplanes) mostly invisible to radar and other light waves not in the visible spectrum, but who cares if a plane doesn't show up on radar if I can still see it with my eyes, right? There have been attempts at things that are like invisibility, but most of these are just fancy ways of camouflaging things.

Like the one they are really excited about right now:
It involves using crystals. Two crystals working together can cause the light to split and... well, it's not important. Here's what they can do with it, right now: the can make an ant or a grain of sand invisible. Basically, with this technique, the thing being made invisible is only limited to the size of the crystals being worked with. And they think they can make bigger crystals. The problem? You can see the crystals! What's the point of that, I, again, ask. What good does it do to conceal something if you know there's something concealed? You may as well throw a blanket over it.

There is another method being worked on, and, supposedly, the Idea for this one was inspired directly from Harry Potter (I couldn't find the original article I read about it, though, so I can't confirm that). Basically, someone said, "Why not make it like a cloak?" And they started trying to figure out a way to do that.

What they came up with is carbon nanotubes. These are strands of carbon tubing about the width of a hair. The thing about carbon is that it cools very rapidly but also conducts heat extraordinarily well. The tiles on the bottom of the space shuttles were made of something similar to this, and I've personally witnessed one being heated until it was glowing red and been invited to touch it as soon as the heat source was removed. Cool (yes, it was cool, but the tile was also cool to the touch just moments after being heated by a blow torch). Anyway, they have these carbon nanotubes that are very similar to thread. When heat is passed through them, they undergo something similar to heat waves rising off of hot sand in the desert and become invisible. Like this:

They can't sustain it for more than a few moments, at present, but it's a step. And it's a pretty cool step if you ask me.
Posted by Andrew Leon at 10:06 PM