The A to Z of Fiction to Reality: Jekyll and Hyde

Robert Louis Stevenson spent much of his life sick. He was a sickly child that grew into a sickly adult. And he died young. Many of his tales are stories of the adventure that he must have dreamed about as a boy but couldn't have. He couldn't even go out and play pirates, because he spent so much time in bed. It's no wonder he wrote books like Treasure Island and Kidnapped!

Although most of his works are about adventure and daring-do, one particular story stands out from all the rest and has had a huge cultural impact: Strange Case of Dr. Jekyll and Mr. Hyde.

Walk with me a moment...

Remember how I said that Stevenson spent most of his life sick? Well, some people believe that the medical field itself formed a large part of the inspiration for Jekyll and Hyde. Doctors looked so nice, pleasant and respectable on the outside, but they would do horrible things to you behind closed doors. Remember, Stevenson wrote Jekyll in the same time period as Wells wrote Dr. Moreau. Vivisection was common practice. Much of medicine was painful for the patient, so some believe Jekyll was social commentary. Stevenson never said so, but you can't just dismiss these things that were certainly part of what formed Stevenson's personality.

At any rate, whether it had anything to do with the dichotomy of the medical profession or not, Stevenson was incredibly interested in dual personalities. In his teens, he was intrigued with Deacon Brodie, a respectable businessman and politician in the late 1700s. [Deacon was a trade title, not a church title.] Well, apparently respectable, at any rate. At night, he was a thief, using his knowledge of people's homes (from his work which involved locksmithing) to break in. He went 20 years before he was caught and found out, and Stevenson was fascinated to the point of writing a play about Brodie while he was still in his teens. Many scholars feel this fascination with Brodie laid the foundation for Jekyll and Hyde which followed about 10 years after his play about Brodie.

Whatever the case, RLS had a dream in September or October of 1885 that he claims set the basis for Jekyll and Hyde. Or a nightmare. He was screaming, and his wife woke him up. It was Jekyll and Hyde that he was dreaming about, and he set out to write the story immediately thereafter. He wrote it at a frenzied pace, finishing his first draft in a matter of days. Most sources say his wife found it so terrifying that he burned the manuscript. But he couldn't let go of the story and, almost immediately, started on it again. The new draft was also completed in a matter of days, and it was published in January of 1886 (don't you wish things happened that quickly these days?). 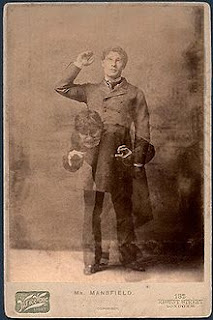 It just so happened that the idea of dissociative disorders were just beginning to be formed by psychologists in the late 1800s. Starting in the 1880s, to be more exact. Prior to this, these types of episodes as RLS describes in Jekyll and Hyde would have been attributed to demon possession, but psychologists were just realizing that traumatic events in life could cause long-term disorders. It was into this intellectual field that Jekyll and Hyde sprang, and it changed the way psychology looked at dissociative identity disorders.

The idea, the wrong idea, of split personalities developed and is still popular today even if it is inaccurate. The phrase "Jekyll and Hyde" has meaning beyond the fact that it's the name of RLS' story, and we don't use that term nicely when speaking about another person. It's a rare thing that an idea like this will escape the pages it was bound in and become a larger idea. Like Frankenstein. But it's an idea that has shaped more than a generation of thought and had a huge impact on actual science and scientific thought. Because a writer was fascinated with an Idea. In this case, the idea that one man, one person, could, in truth, be more than just one man.

Just to put into perspective how popular Jekyll and Hyde was: It sold 40,000 copies in its first six months of publication. This was astounding at the time. By 1901, it had sold more than 250,000 copies. This was at a time when the common person on the street couldn't read at more than the most basic level. Many couldn't even write their own names. Public readings of Jekyll and Hyde were not uncommon.

So... a thing, an Idea, doesn't have to become tangible to become real. Ideas that shape society are just as real as, say, an automobile or an airplane.
Posted by Andrew Leon at 12:01 AM