The A to Z of Fiction to Reality: Platforms

Okay, all you writer people out there, no, that's not the kind of platform I'm talking about! Geez, can't you people think of anything else?

No, what I'm talking about are moving platforms.

In my head, this all starts about 20 years ago when I read The Caves of Steel (1954). If you haven't read Caves, you should. That's just all there is to it. It's probably my favorite of Asimov's books; although, I can't say it's the best. It is the one that has stuck with me longest, though, in that I have a clearer memory of this book, even after 20 years, than I have of any of his others, all of which I read after Caves.

Anyway, in Caves, the Earth is just one big city (sound familiar, anyone?), and the general method of transportation is via these moving walkways that run all through the (world) city. They are set parallel to each other, and each one gets faster as you move inward along the system. Of course, the faster ones take you to farther places, and the slower ones are for shorter trips, but the speed variation is to allow the user to hop from walkway to walkway without sudden, vast changes in speed. Sounds pretty fun, doesn't it?

As I've come to find out, Asimov wasn't the first to use this concept. No, Heinlein used it more than a decade before Asimov in his 1940 short story "The Roads Must Roll." Oh, but we go back even farther, because, guess who! No, really guess. H.G. Wells used this same concept all the way back in 1897 in "A Story of the Days to Come" and, again, in 1899 in When the Sleeper Wakes (later rewritten as The Sleeper Awakes).

But back to Asimov, there's this great chase scene in the book where they're running and jumping between these moving walkways, and I've always thought that sounded like so much fun.

Oh, you say, but moving walkways aren't new. Okay, you're right. They're not. The very first conveyor belt of people (okay, so I don't know if it was actually a conveyor belt, but it sounds cool) debuted in 1893 in Chicago, but it wasn't, in concept, a device of mass transit. That didn't happen until 1954 when one was built inside a railroad terminal in New Jersey. It was removed a few years later due to non-use. Moving walkways are common in limited usages, today, the most common being the escalator.

All of that may be about to change.

Not that I think that coveyor belts of people are going to become a common mass transit device. At least, not until cities do actually begin to grow together (kind of like Dallas/Ft. Worth, which is, in all respects, just one city at this point, I don't care what they say (I know, I've been there)).  However, there is a push for more efficient mass transit, especially in Europe, and moving platforms is one of the new ideas that is getting a lot of attention.

The problem, it seems, is that high speed railways are just too inefficient. People have to spend too long waiting for trains, too much energy is required to accelerate the trains, and too much to stop the trains. Basically, it would just be more efficient if there were a continuous trains that never stopped. Really, it saves energy. But if it was a high speed thing, how would people get on and off? Well... 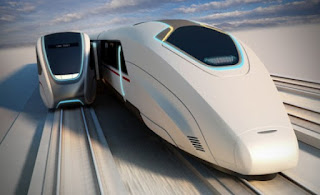 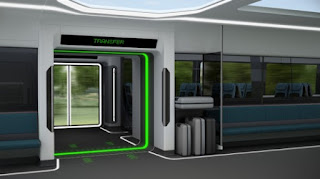 and, then, the docking train would return to its station to pick up more people. The main train would never stop, get people where they need to go faster, and there would be no huge train stations, just these docking ports. Of course, the thrust of this plan is to give people a viable alternative to cars. If mass transit was both cheap and fast, people would be more inclined to use it. In Europe, at any rate, it seems that the main reason people use cars over mass transit is that they can get to where they want to go before they're even on the train to get there due to the long waits at stations, and this plan for moving platforms is a way to get past that.

Personally, I'm all for anything that gets cars off the roads. They're noisy, messy, and waste fuel. I was just reading the other day that we in the USA waste something like 400 billion (BILLION) gallons of gas every year sitting at traffic lights. That's why you should all buy Priuses. Priusi. You should each get one. Or switch to cars that drive themselves. I'm all for those, too. At any rate, I think this is a first step to the kind of mass transit that we see in the stories that I mentioned. If walking on a moving sidewalk got you there faster than driving your car, would you take it?
Posted by Andrew Leon at 10:15 PM