The A to Z of Fiction to Reality: Klingon 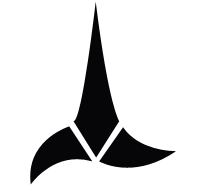 I bet you didn't know that, did you? We now have fully functioning Klingons. Really! Just head right down to any big sci-fi or comic book convention, and you'll see plenty of them wandering around. They even have their very own beauty pagent right here on Earth! 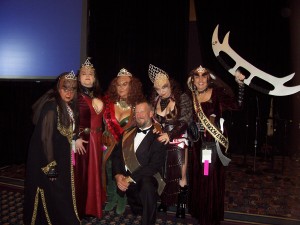 If you listen carefully, you might even hear some of them speaking in their own native language. And, really, that's what this is all about.

I'm not really a big Star Trek fan (yeah, yeah, I know... them's fightin' words to a lot of you out there. Especially you Klingons). It's not that I haven't watched it; I have. Well some of it (sorry, I've never seen a complete episode of Voyager or DS9). It's just that, well, to put it bluntly, it never could stand up against Star Wars, and that's all there is to it.

But there is one thing that has fascinated me about Star Trek and that's people's devotion to it and especially their devotion to the Klingons.

See, the Klingons were created  to be the whipping boys of the Star Trek universe. And I mean that in the original sense of the word. They were created to take all the punishment so that we, the viewers, could learn whatever lesson was being preached by Roddenberry that week. You wouldn't think that people would latch onto the dudes that weren't just the bad guys but the incompetent bad guys at that. From what was considered a failed television show.

But that's what happened.

Way before sci-fi conventions were cool or popular, back in the '70s, Star Trek was becoming a thing. More specifically, the Klingons were becoming a thing. When Paramount decided to go ahead with a feature film in the late '70s (released in 1979), they decided that the Klingon language should actually be represented, so James Doohan ("Scotty") came up with some words for the film. In effect, Doohan created the sound of the language.

Fans wanted more, but there wasn't more to go on.

Until 1984. Production was underway on The Search for Spock, and Leonard Nimoy (Spock) wanted something more than the "gibberish" that they'd been using as the Klingon language. It would be hard to say, at that point, that pressure from fans of the Klingons had nothing to do with this. At any rate, linguist Marc Okrand was hired to devise the basics for a full Klingon language. His first book on the subject, The Klingon Dictionary, was published in 1985. The language has only continued to expand from there.

There have been more than just a handful of books published in Klingon,

and, in 1992, the Klingon Language Institute (KLI) was founded in Pennsylvania. Klingon is the most widely spoken fictional language.

Wait! What? It's the most widely spoken fictional language? Yes. As the KLI's existence implies, you can take classes in Klingon, and there are some experts that are fluent in it. Well, as fluent as one can be in a language that's still missing words. The thing to note here is that people can speak fictional languages. And I'm not talking kids speaking Pig Latin, either. Adult people that devote their time to learning these things.

Somewhere in there, a line was crossed. The line from just being some bit of a story somewhere into something that's real. The only other good example we have of something like this is Tolkien, who devised not just one but two languages as support for his writing. But he did that. And Tolkien was a linguist. It was all a part of his world building. But Klingon has gone a step beyond. Klingon has come about, really, from pressure from fans. It was like they reached into this fictional world of Star Trek and pulled Klingon out of it into the real world.

Just, you know, if you do ever happen to be at any of those conventions and see Klingons walking around, be careful. You don't really know how real they may or may not be.
Posted by Andrew Leon at 12:01 AM