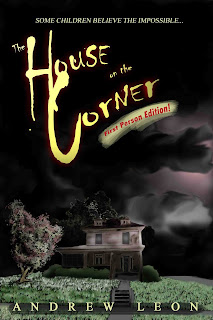 Three siblings have their plans for the summer ruined as they move across country as soon as school is out. The new house has been mostly vacant for the previous two decades, when the previous owners mysteriously vanished. The kids in the neighborhood believe the house is haunted, and even the adults can't deny that strange things happen around the creepy, old house on the corner. The Howards think these are no more than stories springing from overactive imaginations. That is until they discover a cache of ancient weapons. And what does the crazy old man across the street with his dire warnings have to do with it? Tom, Sam, and Ruth are convinced that things are anything but normal.
All children dream the improbable; some dream the impossible. What happens when three children stumble into the impossible? Will it bring them together, or will it tear them apart?

Reviews:
Rusty Webb gives The House on the Corner 4 out of 5 stars. You can read his review here.

Shannon Lawrence gives The House on the Corner 4 out of 5 stars. Here is her review:
"The House on the Corner takes the reader on a fantastic voyage, full of mysteries and wonders. The story slowly unwinds as the kids adjust to their new surroundings, with the mystery gradually building around them, along with the pace. It's so much easier to believe in the fantastic when you view it through a child's eyes. The children in question not only discover a whole different world, but find amazing abilities within themselves, as well. The children are realistically drawn, as are the parents, and you'll find yourself drawn in by the characters, sharing their whimsy, eagerness, fear and confusion. "

Jennifer over at Serendipity's Library reviews a bunch of books here, and mine is one of them. Make sure to check it out.
Briane Pagel (author of Eclipse and the After) has a lot to say about The House on the Corner:

"I have no idea where the story is going but it's a great story nonetheless. At least three times I have thought 'OK, that's what this story is' and then it's not that thing AT ALL."

"I'll give it the highest compliment I can: I LOOK FORWARD to reading it each night. Last night, I skipped watching Thor and read your book instead. And I've been waiting to watch Thor for months."

"What I'm saying is, the book was excellent. It got better with each page, and thus, when I finished it, I was ready for more and you don't have more yet."

He gives it 5 stars. For the full review, go here.

Chapter One
The Move
The last bell of the school year is like waking up on Christmas morning. You lay there in the dark straining your ears for some sign of life out in the world so that you know it's time to get up. Holding your breath waiting for that first glimmer of dawn through your window. Time creeps to a halt, and it's as if you are the only thing alive in the universe. Not just the only person, the only thing. Everything else crystalized in amber. Frozen. Just when you think you can't take it any longer, though, you hear, muffled through the walls of the house, your parents alarm clock going off and time surges back into motion. Those last minutes of school are just like that. Except with more noise. The last bell finally rings and you have three months of days glittering before you, presents waiting to be opened.
Thinking about those days of summer is all consuming at the end of the school year just like obsessing over Christmas presents all through the month of December. Planning. Anticipating. Day dreaming.
Being told halfway through May that we were moving was like having Christmas canceled. No presents. No plans. All the anticipation of spending summer with my friends, with my best friend, yanked away. Like waking up Christmas morning to find that the Grinch had visited.
The problem was not that we were moving; it's that we were moving out of state. My parents had decided that moving at the beginning of summer would give us, us being my brother and sister and me, time to get used to the new neighborhood before school started. Like that would make it any better. Going back to school always sucks, but, this way, they were ruining the summer, too.

At least, I had been able to go see Return of the Jedi with my best friend, Cory, beforehand. We’d only been planning that for two years, and I would've had to hurt someone if we hadn't been able to do it.


School got out on Thursday. My family went to see Jedi on Friday night, and I went with Cory to see it Saturday morning. He hadn’t seen it, yet, so I had to be really careful not to say anything that would give stuff away. We had to wait in this long ass line (both times). That’s what made it so hard not to give anything away about the movie, especially when he kept asking me questions. I mean, you can’t tell someone that you think the coolest part of the movie is when Luke cuts off Vader’s hand. And then when Vader throws the Emperor over the rails. That would ruin the whole thing! I was able to say a few things about Jabba the Hutt since he didn’t know who that was, but I couldn’t say anything about Boba Fett. Cory loves Boba Fett. And I couldn’t talk about Princess Leia, because… um… well, I just couldn’t tell him about what happened to Leia, and we’ll just have to leave it at that, okay?
Other than the movie, we spent the rest of the time after Thursday packing and cleaning. I didn’t remember how bad packing sucks. Mom made us go through all of our stuff over and over again getting rid of things that she thought we didn’t need anymore. Just because I haven’t played with a toy in a few months doesn’t mean I don’t want it