The A to Z of Fiction to Reality: Nanotechnology

Everything gets smaller, right? Well, except for cars. For some reason, us people in the US can't get over huge cars. From clocks to wristwatches, from mainframe computers to desktops to iPads, from cellphones 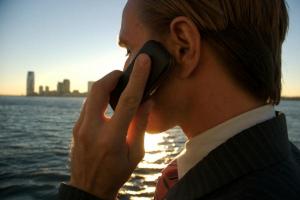 Everything gets smaller except those stupid cars. And I just don't get that. About the cars. I totally get things getting smaller. I mean, not just is the cell phone smaller, but it includes all sorts of gadgets. Everything except a coffee maker, and I bet they're working on  that.

However, the greatest example of how things are growing smaller is nanotechnology. Just to be clear, nanotechnology is the study of the manipulation of matter on the atomic and molecular scale. Nanotech is important because materials act differently on the molecular level than they do at the macro level. Because of its incredible diversity, specialized sub-fields are already emerging.

Just to give some examples of applications in nanotech:

For medicine, testing is going on, right now, for little nanofactories in the body that can do things like fight cancer. They attach to the tumor and deliver medicines directly into the tumor reducing surrounding tissue damage to almost nothing.

Remember those carbon nanotubes from this post? With nanotechnology, they can be used to regrow bones and repair other tissue damage.

Nanotubes can also be used for water filtration, which is pretty incredible. They think they can eventually get it so that all contaminants can be removed.

Nanotechnology is also in development for more efficient energy usage and storage. For more memory storage in electronic devices. For increased power and higher beam quality for lasers through the use of quantum dots.

But where does all this come from? Where did nanotech begin?

The fictional roots and scientific roots of nanotech, of tiny "machines," go back to almost the same place. Well, the same time. Arthur C. Clarke, in his 1956 short story, "The Next Tenants," describes tiny machines which are the first fictional example displaying the concepts of what we now associate with nanotechnology. In science, the first mention of these concepts followed a mere three years later during a lecture by physicist Richard Feynman. Had he read Clarke's story? No one knows.

There are a few short stories in the '60s and a novel with these concepts; although, none of them are really that important in and of themselves. It's all just planting ideas.

The term "nano-technology" came about in the '70s, but it was the '80s when nanotechnology really became a thing, both in science and in fiction. It was something that sort of came about by accident. At least, scientifically. There were a couple of discoveries, and, suddenly, science was, like, "oh, we can make nanotech stuff, now!" Fiction heard science say this, and ran away with it. At that point, the two became hopelessly entwined, because, as soon as someone starts writing about some application of nanotech or nanobots or nanowhatever, science says, "I think we can do that!"

Okay, that's not exactly true... nanotech has become the "magic" in science fiction in a lot of ways these days. We don't really know what kinds of things are possible, yet, with nanotechnology, so science fiction likes to do whatever it wants and call it "nanotechnology," because no one can say, "No, it's not!" I have an issue with calling magic "science," so this kind of bothers me. On the other hand, I have no issue with calling science "magic." Part of the issue here, I'm going to trace back to Fantastic Voyage

Fantastic Voyage gave us, more than anything else, this idea that nanotechnology was about tiny, little machines (and, no, when you're talking about things on the nano-scale, "tiny, little" is not redundant). This isn't what nanotechnology is about, but it's what sci-fi wants it to be about. So we get things like the replicators in Stargate which are nanobots that can build themselves into anything, but the implication is that they are molecular-sized robots or, as in Fantastic Voyage, something that has been shrunk. Nanotechnology is not about shrinking things. Even if nanotechnology may be able to be used to make things smaller.

At any rate, nanotechnology is a big thing in sci-fi, right now, and rightly so. The sci-fi is fueling the science, and the science is fueling the sci-fi. The science that lead to nanotech was kind of accidental. Well, there were a couple of different things that were developed, one of which wasn't by design, and, when they were combined, they realized that they could do these nanotech things. But would they have thought to put those things together if Clarke or those few other writers hadn't written about them, first?

[Note: Isaac Asimov did not write Fantastic Voyage. I don't know if any of you thought this, but I certainly did. I have the book! No, he only adapted it. It actually started out as a movie, and Asimov was hired to write the adaptation which was actually released before the movie came out, which confused matters even more, because even people at the time thought that the movie was the adaptation of the book. I say all of that to say this (because I found it interesting): Asimov improved the story. He felt that there were some logical inconsistencies in the movie, and he fixed all of those things in the book. After reading about them, I have to say that Asimov was correct.]
Posted by Andrew Leon at 10:07 PM