Let's have a discussion. Well, sort of. This is not going to be a typical movie review for me, because I want to talk about a lot of stuff that doesn't actually pertain directly to the movie but is stuff that is brilliant about the movie. If I had my way, this would be all of us going out after the movie and sitting around talking about the movie. So not a review, but a discussion. Like my wife saying, "Oh, I'm sorry. Did I just step on your moment?" was her favorite part and my daughter responding with, "On your left. On your left. On your left." Not that I probably won't wrap it up with a bit of a review at the end, but, first, let's talk about some things. 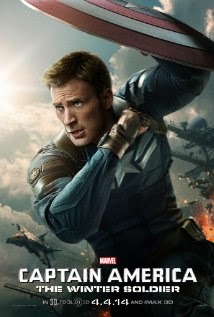 Comic books were a big part of my life for a long time. Something like 20 years. But I've, now, been out of comics for something like a decade, and the Winter Soldier was introduced after I quit reading and following comics. I had no idea who or what he was, so that whole part of the movie was pretty cool. And I'm glad I didn't know anything about it, although it caused problems for members of my family who wanted to ask me questions (because if it's about comics, I almost always have an answer), and all I could say was, "I don't know anything about the Winter Soldier."

Then there's the whole Nick Fury vs. S.H.I.E.L.D. aspect of the movie. 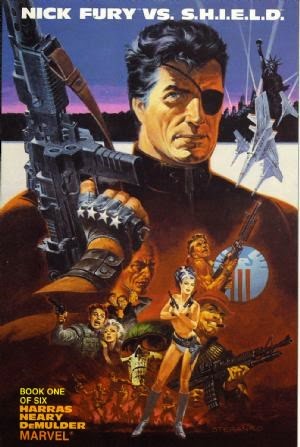 Nick Fury is one of those divergences from the comic books. In the comics, Nick Fury, also, fought in World War II and is still alive today because he takes something resembling the super soldier serum that keeps him alive. The Howling Commandos actually ran with Fury during the war, not Captain America. But they've done a great job so far of twining the Fury/Captain America stories into something that works for the movies, and they did that again in Winter Soldier by bringing in major elements of the vs. SHIELD story. Being someone that read that story back in the 80s when it came out, I really appreciated that they worked it in here. And what they did makes me really want to see what's coming next (and makes me really wish I could watch the SHIELD television series and see what they're going to do with all of this there).

I was also gratified with the reveal on Arnim Zola, because I wondered about what they were going to do with him after the first movie. It will be interesting to see how that will play out in the future, too.

Possibly, the best thing, though, was the introduction of the Falcon. I have issues of Captain America going back to when the Falcon was Cap's partner. Or sidekick. Or whatever you want to call him. It's great to see them (Marvel) bringing in characters like this. It gives the Marvel Movie Universe so much more depth. Which brings me to what was probably my favorite line in the movie, "I do what he does... only slower."

That's about all I can talk about without giving actual spoilers, which is why it's too bad that you guys didn't go see the movie with me and are sitting around at a Round Table (pizza place) with me eating Parmesan twists and talking the movie. Maybe next time, right?

Captain America: The First Avenger is one of the best super hero movies in terms of capturing the essence of the comic that has ever been done. Of course, Marvel is making it harder and harder to say "one of  the best" because they keep doing that over and over. Captain America: The Winter Soldier is easily of the same quality as its predecessor. I hesitate to say that it's better, but it might be. If nothing else, Chris Evans is as much Captain America as he's ever been and I'm beginning to think he may actually really be Steve Rogers.

One of  the things Marvel seems to be exploring is who their heroes are just on their own. Of course, Thor starts out that way, with Odin taking his hammer. Iron Man 3 asks the question of just who is Tony Stark without his armor. And The Winter Soldier not only poses the question, "I heard you're more than just the shield," it puts Cap up against a villain that is able to dismiss the shield as nothing more than a piece of equipment, forcing Cap to be just Steve Rogers. Of course, there's more to it than that, but, again, spoilers.

As I mentioned, Chris Evans is excellent. If nothing else, Marvel has found actors to be the perfect embodiment of their heroes, and it wouldn't actually surprise me to find out that Evans is just a cover for Captain America.

Scarlett Johansson is everything that you could hope for alongside Cap. And her goal of finding him a date adds humor throughout the movie and comes off completely naturally.

It was great to see Robert Redford in this. His physical presence on camera is just as strong as ever; he was excellent as Alexander Pierce. He oozed politician, and it was great.

But the greatest addition was Anthony Mackie as the Falcon. He was... well, perfect. Just a hint of young Will Smith cockiness but with his own maturity. He's another example of great casting, and I hope we see more of him in the future movies, both Captain America and the Avengers.

If you've liked (loved) the other Marvel movies, I don't see that there's any way that you will not enjoy The Winter Soldier. If you've found that the Marvel movies aren't your style, well, I think you should go home and re-think your life.
And, yeah, sure, I know that line is from a different franchise, but I mean it all the same.
Posted by Andrew Leon at 11:31 PM