Allegory of the Miniatures (part 5)

That time back in Shreveport was the last time I spent any considerable amount of time painting for other people, although I have sold some figures here and there in the last many years. Most for way too cheap. For instance, I wish I hadn't sold this one, at least not at what I let it go for: 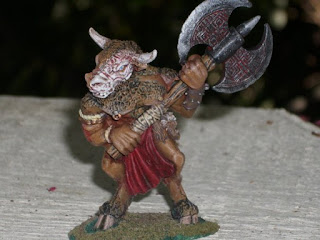 But that's not really the point.

Before I get to the point, here's the last army type group of miniatures I painted. I intended to sell them when I started out on them, but, by the time I was finished with them, I decided I wanted to keep them. It's a group of Eldar troops from Warhammer 40,000. 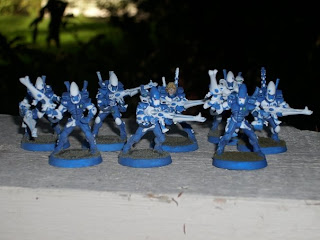 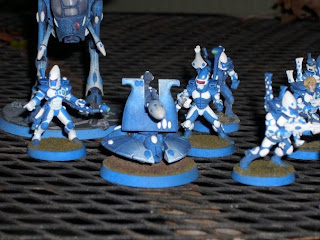 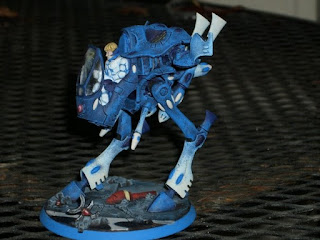 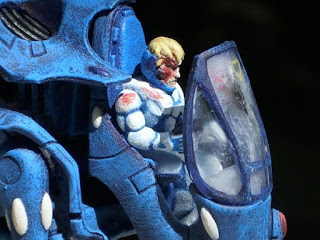 The main thing here is learning to know what you're good at and recognizing it as such. When you're good at something but go around denying it, it comes off as fake or lame. Either you are so insecure that you have no faith in yourself and refuse to believe other people when they compliment you or you're just playing at the denial to get people to pump you up with comments like, "no, you really are good." Neither option works to your benefit. People get tired of being around someone that refuses to believe in his/herself, and false modesty, eventually, becomes offensive and tiresome as well.

Likewise, humility is not acting as if you're not as good as other people. Humility is lifting other people up. Helping to elevate them. Being willing to bend down and give someone a hand. It doesn't do anyone any good when you can see that someone needs help with something and, yet, you go around self-effacingly saying, "no, really, you're great!" to that person and not helping them. Humility is being willing to get down in the ditch in your best suit and pulling someone out of the mess they're in. Humility is saying being aware that having more money or more power or more fame does not make you more worthy of person-ness.

I am not the best painter out there. Far from it. If you want to see some really great painting, look up the Golden Demon winners from the miniature contest that Games Workshop does every year. Those things are amazing, and I sometimes wish I had invested the time to get that good. However, I was the best painter in the group I hung out with and, probably in that corner of Louisiana. If there was anyone better he was sequestered in a basement somewhere not letting anyone see what he was doing. At that point, it doesn't really matter anyway.

I spent a lot of time painting with my friends and showing them different techniques, not hoarding my knowledge. Yeah, I spent time putting myself out of business, as it were. The guy who bought me all the paints used to come over and paint with me all the time. We'd get two miniatures of the same type, and I'd show him what I was doing while he tried to reproduce it. And my cousin... well, my cousin would come over and paint so that he could get me to "help" him on the detail stuff that he couldn't do. Yeah, it was his way to get out of paying me to paint for him, but, hey, it gave me someone to talk to when I'd otherwise have been sitting there alone.

As the title says, all of this is an allegory. When I talk about grammar and punctuation, it is no way meant to be about "being better than anyone." I am, however, better at grammar and punctuation. No, I don't know that about each and every one of you individually, but I do know that in a general sense I'm better at grammar and punctuation. So, if I talk about comma usage, it's not about me going off about being better; it's about me trying to give you the tools to also be better. Like sitting down and painting with you and showing you how to do a proper dry brush stroke. If I review a book and talk about repetitive use of the word "then," it's not about me saying that I'm a better writer or a better person; it's to point out that there is such a thing as overuse of that word. I'm sure I have my own word reliances of which I may not always be aware. Like suddenly.

Anyway... I hate the idea of explaining an analogy, but, after you work with kids long enough, you kind of learn to explain everything. Better to explain it than to leave it open to someone not getting the point. So, if you know what I was talking about this whole time, that was great. If you didn't, don't tell anyone. Just say, "oh, yeah, I knew you were talking about grammar all along" and let it go at that.

Which is not to say that the painting story wasn't true; it was. I also felt like talking about painting. One of these days I'll get back to it for a little while.
Posted by Andrew Leon at 9:54 PM