Allegory of the Miniatures (part 2)

So... Giant robot models. They were a turning point I didn't see coming. These things 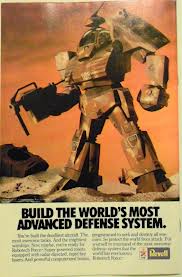 were fully articulated, which was really cool. They were a whole new level of complexity and a lot of fun to build, because, if you messed them up, they wouldn't move, and you didn't want that. My robot models were the envy of the neighborhood and the end of my career selling models. See, after I started on the robots, I never went back to mere airplanes again, and I wouldn't sell my robots. Period. I had a table in my room with all of them set up on it. This was one of my favorites: 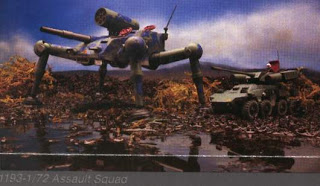 A few of them even transformed. 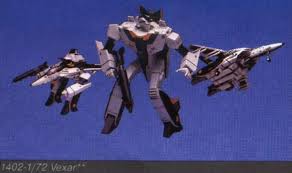 There were at least three variations on the transforming kit. Basically, they were all the same model, but, you know, I had to have each one. Besides, they were the most challenging, because  the pieces had to be able to slide around. A kid that lived across the street bought one, because I wouldn't sell him mine, and he didn't even get the basic airplane mode out of his. His ended up a huge mess that he dumped on me to see if I could fix, but, you know, once those things are glued, there's not much you can do with them.

Anyway... High school started. I had this one friend; he was kind of my only friend at the time. Yeah, middle school was not a happy time for me, but, then, who is it a happy time for? But I digress...
I had this one friend who was in the school D&D club. Now, I didn't play D&D or any RPGs or anything, because, well, my parents wouldn't have approved. Not that I ever asked, because, when I was in about 6th grade, I'd ordered the books Clash of the Titans and Dragonslayer from my Scholastic order form at school, and my dad threw them away when I brought them home, because they had "magic" in them. It was rather traumatic and the end of any discussion with my parents about what I was reading. I figured role playing games were a bit too far to push it, though, so I'd never gotten involved. At that point.

Anyway... I had this friend, also a freshman, in the D&D club, and he mentioned to them my giant robot models. For some reason, none of them believed they existed. I think, by this time, the models were no longer being available in stores (I know I wasn't able to find them anymore, at any rate), so he started begging me to bring them to school to show the club. After a few weeks, I succumbed, and I brought a few of them to school with me. I have to say it didn't help my "nerd rating" and I already went to a nerd school, as my brother used to say.

Just to put this in perspective, these giant robots came with pilots. You can see the head of one looking out through the turret from the tank above. The "glass" cockpit cover on the top robot opened, and you could see the cockpit interior and pilot in there, too. These little pilot figures were around the size of 20mm miniatures, the standard size for D&D. Actually, they were slightly smaller, but close enough. And this is where everything changed:

1. I discovered that there was a game called Battletech that was based on this giant robot idea. It was more of a board/tabletop game than an RPG (at the time), and I immediately got interested in it. When my friend moved later that year, he gave me his Battletech stuff, which consisted of the basic game and one book of mechs.

2. I got flooded with requests to paint miniatures from guys in the D&D club. Yeah, they were so impressed with my models that they all wanted me to paint their figures for them. I started out charging $1.00 a figure but pretty quickly found that that wasn't going to work. See, one guy immediately brought me a huge bag of 30-40 loose figures, which I thought was pretty good money, but everyone else started offering me more money to bump their figures up the painting list. In the end, I was getting around $3.00/figure for fairly basic paint jobs. And, remember, I was using oils, because I just kept right on using my model paints. It was what I was used to using. The detail on the minis wasn't great, but it was a lot better than what they'd had doing it themselves, so everyone was happy.

Eventually, I started buying mech miniatures of my own for Battletech and started painting those, too. When I was a junior, the school shut the D&D club down, and, between that and the fact that I was never home anymore, I quit painting for other people. At that time. I continued to use oils on my miniatures for the next many years, but more on that next time...

Here are some pics of my oil painted mechs (ignore the dust contamination (I will never figure out how things accumulate dust while in a box!) and missing antennas). Several of these are the same class as the models I have. Wherever they are. 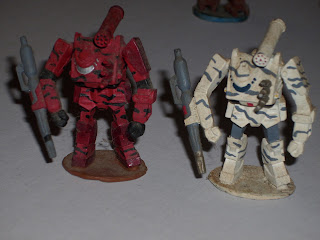 Thunderbolts (I have this in model form) 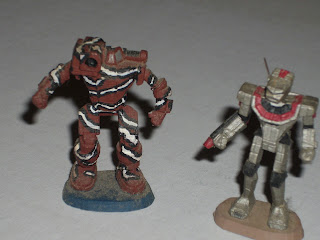 Hunchback (one of my favorite mechs) and a... Commando? I think. (no models for these) 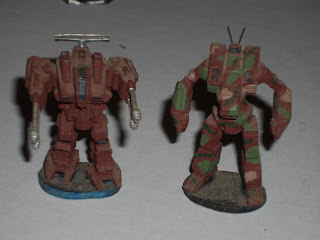 Rifleman and Archer (no models for these, either) 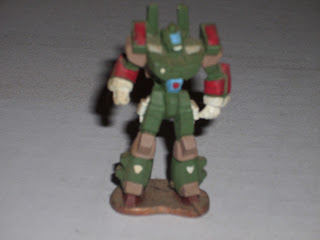 Crusader (I think there was a model for this one, but I can't remember for sure) 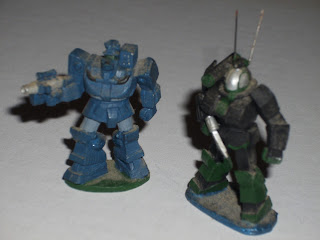 Both of these were models. 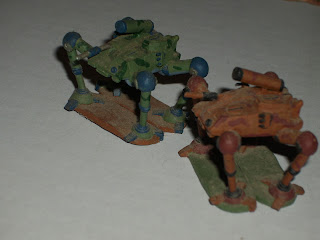 As was this one (pictured above).

The only writing lesson I have from this is that sometimes you can take what you learned in one genre (models) and apply it to another genre (miniatures). Although I loved models and would kind of like to sit down and do one now, they never brought the same satisfaction as painting miniatures. I wouldn't have guessed that when I was 12, though. You have to be open to growth and change.

Note:
Make sure you come back on Monday for an awesome give away!
Yeah, some of you may have what I'll be giving away, but it will still be awesome, and you can tell all your friends that don't have it!
Posted by Andrew Leon at 9:36 PM