How To Breed a Better Writer

First of all, realize that it's very hard and that writing is a grueling and lonely business and, unless you are extremely lucky, badly paid as well. You had better really, really, really want to do it. Next, you have to write something. -- Douglas Adams

I love that quote by Adams. I don't love it because of what it says about writing; I love it because of his relationship with writing, that being that he was sometimes locked up by his publisher to make him, you know, actually write. Writing was almost always the last thing he did even though he seems to have spent his time bursting with ideas.

Adams is, in my mind,  the only good reason for NaNoWriMo. That's how he wrote. Tied to a desk with the command, "Write this now. No, right now!" I think it was The Restaurant at the End of the Universe that he wrote in about two weeks because he'd been locked in a hotel room with someone to make sure that he did things like eat.

If you like Douglas Adams and you like Neil Gaiman, you should certainly read the book Don't Panic by Gaiman about Adams. What better pairing could you have?

But all of that is kind of beside the point... but not really.

The results of a joint study between Yale and Moscow State University (yeah, in Russia) were released last week that shows that there is "a modest but statistically significant familiality and heritability element to creative writing." (the whole article is here) Basically, if you want to be a writer, have parents that are writers.

That explains why my kids are so good, I suppose. At writing, I mean.

But I actually want to jump back up to what Adams said: "Next, you have to write something."

See, that's the important part. It doesn't matter how "good" you are if you never do it. So, in that case, the person that didn't get any special helpings of talent from his/her gene pool but sits down and determines to write and, then, does is way better off than the person that has the best "writing genes" in  the world but never picks up a pen. It's like the potential energy of a ball held in your hand but never thrown. What does it matter?

Going back to Adams: he had such vast stores of potential energy, but most of it went unused. In the end, he only wrote a handful of books, brilliant books but a very few nonetheless, because he couldn't make himself sit down and do the work. Maybe, if NaNoWriMo had existed then, and he'd only spent that one month a year writing, we'd have more books from him.

Speaking of NaNoWriMo, my wife has decided to do it this year. She's hoping that having two writers in the family will genetically and environmentally spur our children on to further writing. Especially our younger son who has started this brilliant story (you can find "The Language of Nythos" in Charter Shorts) that he is reluctant to carry forward. My wife is a good writer, too, and writes in a way I wish I could: quickly. Words seem to flow out of her, and I have to pull each and every word out of my head like grass burrs out of socks (or the bottom of a bare foot). But there will be more on all of that later.

My other thought about this study, which focused on the actual writing, is what it has to do with story telling in general. Like oral story telling. I think there must be a link at some point, but they weren't looking at that, so they have no data on it. It makes me wonder, though.

At any rate, if you want to be a best selling author, it does help to be related to one (as the study seemed to indicate) but not because that means you're good; that just means you have an easy in. As Adams said, for it to be anything other than badly paid, you have to be extremely lucky. I'll add: or work extremely hard. I suppose, in the end, that's why Adams didn't have to write more. He hit on the "extremely lucky" with his first real project, but he had lots of experience with the "badly paid" before that. Maybe, if Hitchhiker's had only done moderately well at first instead of what it became right away, we would have had more from him.

The House on the Corner is being featured today over at Author Andrea Pearson. You should go check it out.

And the news I know you've all just been dying for!
Today only!
Parts 1 through 5 of Shadow Spinner will be available for FREE! today, Monday, October 15. What a jackpot! If you've missed any of the parts, today is the day to pick them up! Well, except for "Part Six: The Man with No Eyes," but that one will be free later in the week. At any rate, follow the links below and pick up your FREE! goodies! Make sure you tell all your friends about it. Really, do that. I'd really like to break into the top 20 on the contemporary fantasy list, so send everyone you know. Oh, and, yeah, because I have to say it: be sure to click the "like" button if you haven't done it already! 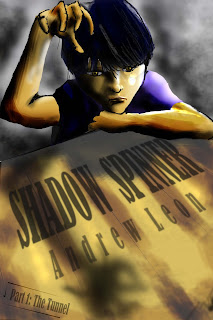 Email ThisBlogThis!Share to TwitterShare to FacebookShare to Pinterest
Labels: Don't Panic, Douglas Adams, Hitchhiker's Guide to the Galaxy, House on the Corner, man with no eyes, NaNoWriMo, Neil Gaiman, Restaurant at the End of the Universe, Shadow Spinner