[with thanks to Douglas Adams]

From a blogging perspective, I think that's what November is, the long, dark tea time. For one thing, it is so dark. Getting up at 5:30 a.m. is never fun, but it's even worse in the dark times of the year when it's still pitch black an hour later when the rest of the family starts getting up and even still dark at 7:00. No, I'm not having tea, but maybe that wouldn't be such a bad idea? I don't really know. Hmm... maybe, I'll have to try morning tea to see if that helps me get through the mornings.

Of course, that doesn't really have anything to do with blogging.

November is the long dark for blogging because of NaNo. At least, I'm pretty sure it is. If I was NaNoing, I know I wouldn't have any time for any kind of blogging. Or eating. Probably sleeping, too, except for what would happen actually on my keyboard when my head would crash to the table from trying to pound out 1700 words a day. I do know that I saw a dip in blogging activity last November, so I fully expect that to happen again. Still, that may not be all bad. Fewer blogs being posted on will give me more time to do my own writing as opposed to keeping up with blog stuff, so the fact that everyone else is bent furiously over their keyboards may not be a bad thing.

Of course, the drop in page views does make a blogger uncomfortable. You know, other bloggers. That kind of thing doesn't affect me at all. Nope, not me!
heh

Speaking of being in a dark place, Tib finds himself in a dark place with the release of Part 8 of Shadow Spinner. And let me just say, there is no tea involved. 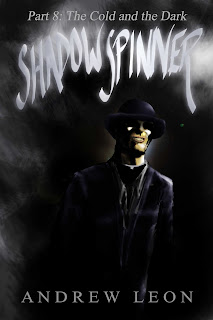 "Part Eight: The Cold and The Dark" is available today, Monday, November 5 for FREE! It will also be available Tuesday, November 6 for FREE! As an added bonus, "Part Seven: The Moth and the Shadow" will also be available on Monday for FREE! As a double added bonus, I'm throwing in "Part Three: The Bedroom" for FREE! also! Look at that, three FREE! chapters all on the same day. Go check out what kind of long dark Tib has gotten himself stuck in.
And click the "like" button!

Speaking of Tib, you should pop over to ~*~Whatever~*~... today. I'm being featured over there and answering a rather unusual question. Go check it out! The whole thing is something called "pimp my blog"... I'm not really sure if I'm the pimped or the pimper. Is that a thing? Anyway... Click the link and take a read.

Now, this part has nothing to do with the long dark except in how it can seem like such a long dark time when you're first starting out in writing. The struggle to write at all (especially for all of you NaNoers out there), the struggle to find an audience, the struggle to keep going when it feels like no one is listening. The long dark struggle. But, really, this has nothing to do with that. In my effort to highlight older posts from when this blog had virtually no readership, I'm bringing up this old thing: The Dream vs the World. Go check it out. And don't forget, just because it's an old post doesn't mean you can't still comment on it.

One other note:
I have a special project I've been working on. I'm hoping to have it out before the end of the month as it is somewhat seasonal. Okay, it's completely seasonal. Stay tuned for more!
Posted by Andrew Leon at 10:15 PM

Email ThisBlogThis!Share to TwitterShare to FacebookShare to Pinterest
Labels: blogging, Douglas Adams, NaNoWriMo, Part Seven: The Moth and the Shadow, Part Three: The Bedroom, Shadow Spinner, The Cold and The Dark