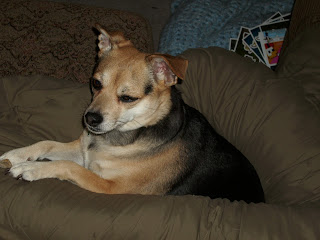 And this is her eating a carrot: 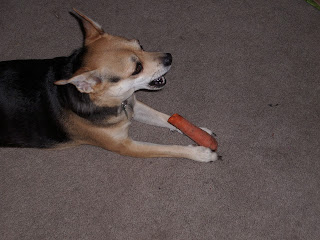 I love my dog. She's, like, the cutest thing ever.

My dog, however, is not a dog person. Um, dog dog. Um, she doesn't like dogs very much. I think I have to relate this to women who say they only have guy friends and don't get along with other women very well.

Don't get me wrong, my dog does have a few other doggy friends, but her general reaction to "strange" dogs while we're out walking is not very... welcoming. Especially if the dog is bigger than her (there are some good reasons for this). Yes, she has a bad case of SDS, Small Dog Syndrome for those of you that aren't familiar.

She started out with a thing against cats, too. Well, actually, she started out with a thing against everyone and everything (except us), but, then again, she is a rescue dog. Mostly, she's gotten over her issues except with other dogs and people that walk funny. No, I'm not making that up. Anyway...
She had this thing against cats and loved to bark and chase them away. Until this one cat... this one cat showed up that wouldn't run away. We were walking down the trail the first time she met this cat, and she charged it, and the cat just stood there. It was almost like the cat had a force field, because my dog just kind of stopped, didn't know what to do, ran half way around the cat with the cat staring, and ran away. Yes, my dog ran away from the cat that just sat there. I say sat because, as my dog was contorting around the cat, the cat sat down and watched. I think it was laughing.

This kind of thing became a routine for a few days at which time the cat decided he would join us on our walks and just followed along. This really tweaked out my dog. You know in horror movies when the woman (usually) thinks she's being followed and keeps looking behind her and nothing's there, but, eventually, she's running away from the nothing anyway? Well, that was what my dog was like except, when she looked back, she could see the cat right there.

I can just imagine the thoughts in my dog's head:
"What's wrong with this cat? Doesn't it know it's the one that's supposed to run away?"
"Cats are not my friend!"
"Why is this thing following me?!"
"Run away! Run away!"

But the cat just kept buddying up to my dog, and, eventually, they became friends. People in the neighborhood thought the cat belonged to me, because he went walking with me and my dog so often. Yeah, my dog on a leash walking up ahead of me with the cat trotting along beside me or gravitating back-and-forth between me and the dog.

Having said that I am a dog person, I should also add that I am not a cat person. Not that I dislike cats, I've just never in my life had any desire to own one, and, until now, there had ever only been one cat in my life that I liked and thought was cool (which is a story for another time).

While all of this was going on, my daughter was doing her best to befriend the cat which she and some of her friends named Sam. Which wasn't really a big deal, since he's a very social cat. A cat that had no collar, by the way, and seemed to never have any place to be. The cat was just always in the park or roaming around the trail near the park. No one would claim him, and, yes, we did go and check around. 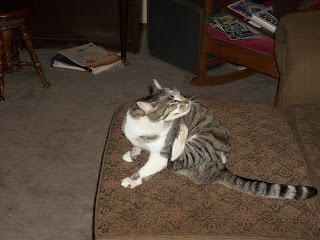 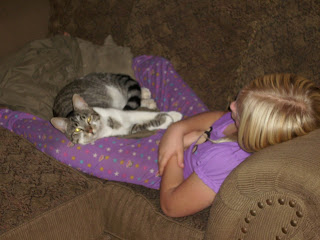 The cat being cozy on my daughter.

Eventually, we did find the owner, although it was quite by accident. He has another cat that is very similar looking to not-Sam (his actual name is Jack) and a dog. He doesn't collar any of his animals, so they have no tags, and none of them are chipped. He doesn't seem to think there's anything wrong with this, I guess, because 2/3 of his animals are home bodies. As far as I can tell, though, Jack never goes home.