Children seldom get a good idea of the lives the adults in their lives lead before they came into them. I'm sure this is true of my own kids even though I do try to tell them stories of my youth. Those snapshot events rarely reveal what a person was really like. And, of course, kids often don't care... not until much later, often not until  it's too late to find out.

That's the basis of "War Angel" by Rusty Carl, a grandchild discovering the secret past of his grandmother. 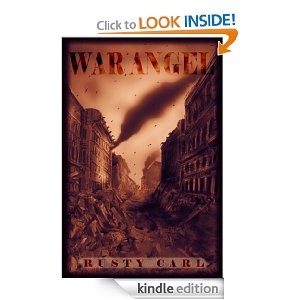 Not that it was necessarily a secret, he had just never been curious enough to find out about it until she was about to die.

It's a good story, although I'd say it opens more questions than it answers. For instance, Engel has always been his grandmother's favorite, and there is an implication in the story that there's a reason for this, but it's never explained. There is a possible reason within the story, but there's not enough information for it to be more than guesswork which is a bit unsatisfying. For me, at any rate.

The other main drawback for me is that it's too short. There's so much more there that's kind of hinted at and, then, passed by. But it is a good story; it just could have used some expansion.

However, if you're looking for a quick read that will immerse quickly, this may be one to look at. It does grab the reader quickly with the immediate questions it raises.

I'm skipping the technicals this time as I have a copy that I know has transcription errors. Even with these, though, it was a gripping story, meaning they didn't distract me from what I was reading. Most of these, if not all, should be fixed at this point, so it should be even better for anyone else.

I'd say this one is a strong B. Definitely above average. Being able to read it in one sitting doesn't hurt, either, even if I would have preferred something longer.
Posted by Andrew Leon at 9:37 PM