Too Many Positives Equal a Negative

I was listening to the radio the other day in the car, because that's almost the only time I can just listen to music. However, as the kids and I headed home from grocery shopping, we hit that time on Sunday night where they have their little talk show. >eye roll here< (I'm not going into why I'm rolling my eyes, but let's just say that it's when they gather together a bunch of men that are basically out of touch with the real world and discuss issues that are meant to help us out. It's a mostly worthless program.) ANYWAY... The topic was stress and how to get rid of bad stress and only have good stress, whatever that is, because they sort of skipped over that other than to say there's good stress and there's bad stress. Whatever. To the body, stress is stress.

They're babbling along, and I was only half listening, because I didn't want to be listening at all, because I wanted there to be music, but I caught one of the guys saying that one of the best ways to deal with stress is to avoid negative people. Yes, yes, surround yourself with happy, bubbly people, and all of your stress will just melt away. And that's when I reached up and turned the radio off.

My son, as he is wont to do, immediately asked me why I did that, and I found myself needing to explain to him that that view, the view of cutting negative people out of your life, comes from an illegitimate arm of popular psychology called positive psychology which, by and large, is worthless and completely made up. This is not me saying this, although I agree with it, positive psychology has no basis in research. It is a series of hypotheses that adherents have made without any proof. I think it was the guy that founded the movement that said something like, "We are hoping that one day the research will prove our claims." Great.

Going with the theme of pointing back to old posts on Shadow Spinner release days, you should all go back and read this post talking about the excellent book Bright-sided by Barbara Ehrenreich. After you read my post, you should probably pick up that book. I think it will be quite an eye opener. On the other hand, if you're totally bought into all of this positive thinking crap, you should just ignore everything I just said.

But don't ignore this!

Today is the FREE! release of "Part Six: The Man with No Eyes." It will be FREE! all day Thursday, October 4 and Friday, October 5. Make sure you go pick it up as it is the first appearance of Michael in the pages of Shadow Spinner. If you want to know more about  him, you'll have to check out "The Evil That Men Do." It's only $0.99. Oh, as a special bonus, you can also get for FREE! "Part Five: The Police Car" today only. I'm pretty sure I said FREE!, so don't miss out! 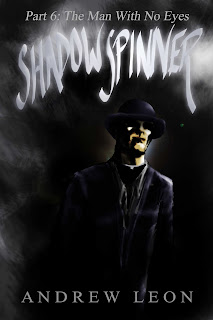 And remember, because, well, honestly, I'm begging, especially if you've picked up previous installments and liked them, please click the "like" button when you download. You could always go back and click "like" on all of the other ones, too. It's not hard. Just a slight twitch of the finger on your mouse. A little more time consuming would be a short review and a rating. It doesn't even have to be a long review. I think Amazon requires something like 20 words, so, you know, you could write something like "This was the most awesomest story ever written, and everyone should read it!" and you'd be more than half way there. And there are even some words left over so you could personalize the review in some way. Seriously, every review helps.

Have a wonderful weekend!
Posted by Andrew Leon at 10:34 PM