Allegory of the Miniatures (part 1)

[Disclaimer: Some of this information is located in my "crafty" tab. There are also pictures there, if you haven't already seen them.]

I started painting when I was pretty young. Not like finger painting, either. What I mean is that I got serious about it at a point when most kids aren't interested in devoting that much time to something that requires that much sitting. Now, I loved to play outside as much (or more) than the next kid, but I also wanted my models to look good. Maybe it was my love of Star Wars that did it.

See, it was Star Wars that really sparked my interest in models. I'd had a few kits, but, like everyone else, I just put them together right out of the box with only the naked plastic to show for it. That meant airplanes that were completely white or cars that were completely black. Or red. But, mostly, black. That all changed when, around the age of 8, I got my first Star Wars model kit: an X-wing fighter. I loved it! Except I wasn't happy with it when it was all finished, because X-wing fighters, while mostly white, are not completely white, and I needed my model kit to look like an X-wing fighter. A real one. So I demanded model paints.

Just to be clear for those of you that don't know, model paints are oil based. Yes, this will be important. They have to be oil based, because water based paints, acrylics, won't stick to plastic. They just run off. Unless you prime the miniature, first, with a base coat of paint that acrylics will stick to, but I was 8, and I had no idea about any of that stuff. What I knew was that there were special paints for models in the model section of the toys, and I wanted some.

You do know that there is no longer a model section in most toy departments, right? It kind of makes me sad. Model building is actually something I would love to do with my kids, but, even if stores did still carry models, they are now much too expensive, which, I'm sure, is why stores don't carry them anymore. The same kit I might have paid $3.00 for when I was kid would be at least $30.00 these days, and, unfortunately, it's just not worth it.

Anyway... I started painting my models, but I still wasn't happy with them. For one thing, I wasn't really able to get them to look as good as I wanted them to look, but, mostly, it was that the idea, as it was presented to me, that you put the kit together, and, then, you painted it. This caused some problems, especially with airplane kits, in that, when you were finished, you'd have a painted exterior, but everything in the cockpit (or the interior of the car) was bare plastic, and it really detracted from  the overall look of the models.

During this same time period, I was learning about various painting styles from my mother in her ceramics class at my church. The real issue, though, was that we used acrylics on the ceramics, and they are a lot more versatile than oils. Really, the only way you can do anything interesting with oils is by doing airbrushing, which I wanted to do, but airbrush kits were expensive, and I wasn't willing to save up to buy one when I didn't know how to use it. Let me just say that you can't do any kind of real detail work with oils without an airbrush because the paint dries too quickly on any kind of detail brush, and the oil paints completely ruin brushes that aren't made specifically for them, and those brushes don't come in detail size.

The important things to know are that by middle school, I had
1. learned a pretty good bit about painting on a large scale by doing ceramics.
2. taken to painting the pieces of my model kits as I assembled them so that the interiors were also painted.

What all of this lead to was me owning a bunch of models that I didn't really want anymore, because I'd progressed so far beyond the skill I was at when I first did the older kits. Although I could go back and paint the exteriors, I couldn't take them apart and paint the insides. This lead to some creativity.

I had a thing for magnifying glasses, and I had pretty cool one that had a 6" diameter. I liked setting off firecrackers with it when we had fireworks at the 4th of July. Sometimes I'd  lite the fuses, but, sometimes, I'd burn right into through the body of the firecracker. We never got a lot of fireworks, so this kind of stuff made them last a lot longer. A lot of my friends would blow up their models at the 4th every year, but that was too easy and no fun. What I decided to do was to use my magnifying glass to make "battle damage" on the models. I eventually worked out some cool techniques which left them looking like they had smoke damage and all sorts of things. Once I finished giving a model I didn't want anymore "enough" battle damage, I would completely melt it down with the magnifying glass. Yeah, it probably wasn't the safest thing to be doing, but it was a lot of fun.

This went on until I got to some airplane that the kid across the street really liked. I mean, he really liked it, and he protested me destroying the plane. After a prolonged argument, he decided he would buy it from me to keep me melting it down. How could I refuse that? That first model, I sold for the same thing I paid for it. I figured it was a bargain, and I went out and bought a new kit. Pretty soon, I had kids from all throughout the neighborhood buying models from me. I sort of couldn't keep up with the demand. In fact, I sold off all of the models I didn't really want at an increasing rate that allowed me to buy more and more kits. I sold them all until I was down to the models I really wanted to keep, and I got offered some pretty high prices for some of those. Well, they seemed high to me. There was this one plane in particular that I got consistent offers of $15 for, a kit I'd paid, probably, $3 for, but I wouldn't sell it, because it was my favorite one. Sometimes, kids would go buy kits and pay me to build and paint them for them. It was a pretty sweet business for a 12-year-old is all I can say.

All of this continued until I discovered giant robot models. 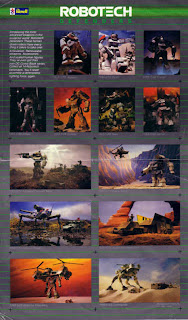 I had most of these, and, actually, theoretically, they are still in storage at my parents' house, though I have no idea what kind of condition they may be in after all of this time. I wish I had pictures of my actual work, but this was 30 years ago, so you're just out of luck. I had almost every kit they made, though, and they were really cool as the robots stood over a foot tall. But more on all of this next  time...

Note:
Just to relate all of this to writing in a more direct way than the overall allegory I'm building:
Learning to write is rather like building a model kit. At first, everyone just puts the kit together and ends up with a rather plain looking whatever with no embellishment. Eventually, you figure out about painting and decals so that the it's a little dressier, but it's still not much on complexity. And even more eventually, you learn how to build your writing piece by piece just like painting the interior portions of the model first. Your writing gains depth and complexity and, maybe, even your own customizations like battle damage or mixing kits or whatever. You don't start out at the end, though. You have to learn to just glue the kits together in the beginning.
Posted by Andrew Leon at 9:21 PM