Allegory of the Miniatures (part 4)

The time of the death of my boss, the owner of the used book store I worked at, was a time of change in my life. Not because of his death, but there were some ways in which it was related. To make a long story short, though, I ended up hooking up with a gaming group in Shreveport. I should reiterate, at this point, that I had never been a "gamer" as the term was understood at that time (which has nothing to do with how it's understood now, which all has to do with video games and MMOs). I'd played some Battletech, but that's about it, and I'd done that mostly with people who also were not gamers.

I had, however, been on the fringe of the... let's call it the gaming community... for years. It's hard not to have some acquaintance with gamers when you work in a store that sells comic books. For one thing, I ended up being the one that would order all of their gaming equipment. And, as you have heard, I'd been painting miniatures for gaming purposes for more than half a dozen years by that point. So I ended up involved in this group of gamers in Shreveport, one of which happened to be my cousin, whom I'd also gone to high school with and played Battletech with and spent one (disastrous) semester at college with, and several others of whom I'd also gone to high school with, although I hadn't known some of them at the time. One of them had known me because of my painting, but, evidently, he'd never stuck in my head, probably because he was a junior or senior while I was a freshman.

This all started out with some RPGs. Actually, it started out with the Warhammer RPG, and ended up with RPG once a week at this guy's house, which ended up in Warhammer Fantasy Battle. He had this huge army of goblins and orcs, and, as it turned out, tabletop gaming was what he and a couple of the other guys were really into. As it also turned out, all of these guys are guys that I had been in high school with. Have I mentioned before that I went to a smart kid, geek high school? Well, if you happened to gloss over that fact, this ought to be all the proof that you need. Evidently, the whole strategy tabletop game thing lends itself very well to a higher IQ level, so we had had a pretty high concentration of tabletop gamers at my high school.

All of this, again, caused a change in my painting career.

As I've stated, I had been painting exclusively with oils up to this point. The question of me painting came up, because some of the guys knew I'd painted miniatures for people back in high school, so I showed them the few things I had, which included the green dragon. 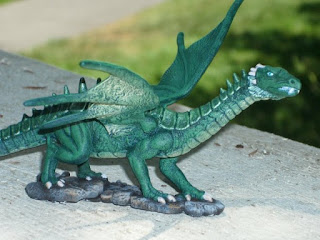 (Remember, this is not how he looked at the time. Back then, he had metallic green plates, for one thing.) One of the guys very soon began asking me to paint some figures for him, but he wanted them done in acrylics.

I didn't own any water based paints. At all. I was working on my mechs, 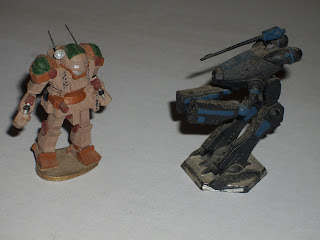 and I was using oils on those. I told him I'd paint for him but that it would need to be in oils as I wasn't reinvesting in acrylics.

He continued to bug me about it. And bug me about it. Until I said something along the lines of "if you want to buy me some acrylic paints, I'll be glad to paint whatever it is you want me to paint in acrylics." I was, of course, joking, because it never even entered my mind that someone would want me to paint for them so badly that they would go out and buy me paints to do it with. About a week later, he showed up with this big paint kit that came with something like 20 or 25 different colors of paint and a selection of brushes and asked me how many minis I'd paint for him if he gave it all to me.

This lead to me painting for nearly everyone in the group at some point or another. Any time anyone had a miniature or unit of miniatures they wanted to look especially good, they brought them to me. I spent several years painting figures for people and not painting my own.

The strangest thing in all of this, though, is that one day I went into this comic shop, a little hole-in-the-wall shop, that I had never been in before. I often stopped in small shops like that, because you could often find good deals on "hot" issues of comics, so I'd stopped in to look around. My cousin may have been with me. I think someone was, at any rate, because, somehow, my name got mentioned, and this guy, the owner of this shop, a guy I had never seen before, knew who I was. "You're that guy that paints, right?" I think I had that deer looking at headlights look, but, evidently, my fame, or whatever it was, had proceeded me.

This guy literally pulled out a couple hundred Essex 15mm Confederate troop miniatures and said, "What would you charge me to paint these?" I think I made a bad deal in regards to those particular miniatures, because I'd never done 15mm figures before, and I just didn't know the kind of monotony I was getting myself into by agreeing. I used so much grey paint over the years painting figures for him it wasn't even funny. Except, I think it was funny to my cousin, because he used to laugh at my Confederate soldier painting assembly line. At any rate, the rates for me painting for him went up every time I took on a new order, and I was so sick of those guys by the end, but I couldn't bring myself to just tell him "no," because he couldn't do it himself (he showed me some of the figures he'd tried to do), and no one else could either. No one he knew, anyway. I wish I had a picture of that army that I painted for him, but this was more than 15 years ago, and it never occurred to me that I would have a reason to have pictures of them one day.

The point, here, for this section of this story is that it's not a good idea, necessarily to marry yourself to just one medium. Or on genre. Or whatever. It's good to try new things. Of course, the big issue for me at the time is that I couldn't see the benefit in reinvesting. I figured I'd been doing fine with oils for, well, years, and the truth was that I had been doing fine with them. BUT! But I surpassed everything I'd been doing in oils by the switch to acrylics. There was just so much more I could do. Washes, inks, dry brushing, detailing. I couldn't do any of that stuff with oils, and I knew that, but I'd lost sight of the value in it from not having worked with acrylics in about 10 years, since I'd stopped doing the ceramic stuff.

In the same way, I don't want to get trapped in any one particular literary genre. I like fantasy. I really do. I probably prefer fantasy, in fact, in my reading, but I like a lot of other stuff, too, and I'm finding I'm having more and more story ideas that aren't related to fantasy at all. I want to try new things.

I think a lot of people trap themselves in their own heads with these identity ideas, "I'm a romance writer" or "I'm a fantasy writer" or "I'm a sci-fi writer." It's like locking yourself in a box. Get out of the box. Try new things. Write new things. Play with new things. There's no telling what you may find that you're good at!

Next time, we'll finish this story up.
Posted by Andrew Leon at 9:29 PM