The A to Z of Fiction to Reality: Genetic Engineering

I'm going to call The Island of Doctor Moreau the first instance of genetic engineering in fiction. It's not really presented as such, because DNA research was still in its infancy. Understand what I'm saying here, the book by H. G. Wells came out in 1896, and DNA research was in its infancy... first discovered in 1869; although, no one really knew what it was. Yet. Still, there is no other real explanation for what Moreau is doing in the book, even if that wasn't Wells' point with the novel. Really, he was making a statement against certain types of medical research (specifically, vivisection) which were somewhat horrific and accompanied by great amounts of pain by the "patient." Wells seems to have opened the door to the idea of genetic engineering, at any rate, as fiction throughout the 20th century has been filled with all sorts of genetic engineering and enhancements. The book itself has had many, many adaptations and spin offs.

Genetics and genetic engineering have become one of our modern bogey men, so much of the fiction surrounding genetic engineering has to do with how "playing God," how messing with the natural order of things, will lead to our eventual downfall. Or to a world we don't want to live in. Examples:

Gattaca: A society that revolves around the genetically engineered. Genetic discrimination is pervasive. Valids, those that were born through genetic manipulation to be superior, are the only ones that can qualify for professional positions in society. The in-valids, those born through traditional means, are seen as weaker in all ways and are relegated to menial positions.

Brave New World: Well, I'll get to this one, later (in a separate post), but this is a book tightly wrapped up in genetic engineering while claiming not be genetic engineering (because it wasn't known, yet, as with Moreau; however, it's clear in concept what is happening).

Of course, the other major example of genetic engineering is in super hero stories and super soldier stories. I'm not even going to bother listing these as there are so, so many. Let's just say they are rampant. Even the clones in Star Wars are genetically engineered.

The first real bit of genetic engineering happened in 1973 with some bacteria. But it was followed up in 1974 with mice. Since then, we've engineered all sorts of things. The food industry does extensive research in genetic engineering; although, people aren't, yet, mostly, at a point where they want to eat food that they know has been altered. However, we tend to have no problem eating, say, cows that have been fed genetically altered corn.

It's even hypothetically possible, at this point, that we could start doing things like choosing the eye color of a baby before it's born. Of course, that's wrapped up in all kinds of ethical arguments, but "they" do think they can do it. If they were allowed. Or, maybe, they have done it, and no one is saying anything about it.

The big thing for me, though, and why I'm taking this back to The Island of Doctor Moreau is that we can do things like

They've had genes from coral introduced, and they are commercially available as pets and have been since 2003.

Malaria resistant mosquitoes have also been developed and could prove a huge boon in areas of the world where malaria is a leading cause of death. Trials have shown a reduction of malaria by 80%.

We also have glowing cats: 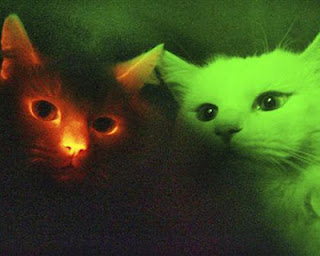 But these aren't yet available as pets.

Other significant plants and animals that have been genetically engineered:

Venomous cabbage: It's been engineered with scorpion venom in its leaves as a defense against caterpillars, but it harmless to humans.

Goats with spider silk milk: Yes, these goats produce spider silk in their milk which can be used to produced bio-steel. Did you know that spider silk is one of the strongest substances we know of? Stronger than Kevlar. We just can't get enough of it from spiders, but we might be able to from these goats. Or, maybe, we'll end up with Spider-Goat!

Cows that fart less: Why? Because cows are one of the world's leading producers of methane gas, a major cause of global warming. If we can make cows that fart less, we can reduce methane emissions.

I could go on, but there's no need. This stuff is real, but it all started in the pages of a book by H.G. Wells at the end of the 19th century.
Posted by Andrew Leon at 11:42 PM