The A to Z of Fiction to Reality: Tom Swift and the TASER

I should have grown up reading Tom Swift. Should have, but I didn't. No, it's not through some kind of weird hindsight thing and a latent desire to have done so that makes me say this. I say it for one reason and one reason alone: my mother grew up reading (and loving) Tom Swift. You'd think that since my mom grew up reading Tom Swift that she would have passed that on to me. But you'd be wrong. I discovered all of my own reading as a kid, which lead to me "doing it wrong" and being labeled "delayed" at one point by a school counselor because I was reading the wrong books. What was I reading? Science.

No, really, I was reading science books (which is also why I say I should have been reading Tom Swift). As I've said before, all of my early reading was non-fiction. Starting at about age 4, I was reading books about dinosaurs. No, not story books. Science books. I was fascinated with them, and I wanted to learn everything I could about them, so what I would ask for was books about dinosaurs. I still have a lot of them, and some of these books would be a struggle for adults. That lead to astronomy and zoology and, actually, history (because I was a patriotic munchkin, and read all I could about the revolutionary time period and the people involved). At any rate, I was in 4th grade before I really discovered fiction.

But Tom Swift... See, Tom Swift was about this boy genius who was all into science and all the adventures he had and all of his inventions! Science and adventure! And my mom never told me about it or got me any of the books. I didn't even know who Tom Swift was until I was in high school, and I was way past being interested in reading about him at that point. [Interestingly enough, though, the first fiction I really got into reading was The Hardy Boys, which was "written" by the same author (but -that's- a subject for another post (and one I've mentioned previously somewhere)).]

As it turns out, the Tom Swift books served as an inspiration to a few people you may have heard of, like Steve Wozniak, Isaac Asimov, and Robert Heinlein. It also turns out that several inventions have been tied directly to these books or appeared in them before they were a real thing. Here's a short list:

synthetic diamonds: Tom Swift Among the Diamond Makers (1911) -- the actual technology to do this was not produced until the 1950s

But my favorite, my absolute favorite is the taser. Everyone always thinks that taser has something to do with laser. And why not? After all, there is also the maser and the (fictional) phaser with names that tie to laser. But not taser. Taser stands for Thomas A. Swift's Electric Rifle. 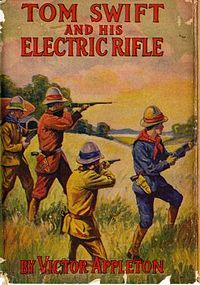 Jack Cover, 60 years after the book was published, invented the taser and named it after his inspiration for it. How much better can it get than that? He read about it as a boy and thought, "I want to make that," so he grew up and did it. That's, like, the height of cool.  It's just too bad Edward Stratemeyer, the creator of Tom Swift, wasn't around to see it.
Posted by Andrew Leon at 9:34 PM