The A to Z of Fiction to Reality: Cyborgs

Ah, cyborgs. If there's anything more terrifying than an apocalypse caused by an out-of-control AI, it's an apocalypse where we're all turned into some kind of cyborgs controlled by that out-of-control AI. Okay, I hear you zombie people out there, but don't get me started on zombies (I already did a post about that). Besides, I think we see a lot of similarities between the cyborg masses (like the Cybermen and the Borg) and zombies, and the cyborgs were here first. En masse, that is. In fiction. [The Cybermen pre-date Night of the Living Dead by two years.]

Anyway... this isn't meant to be a debate between cyborgs and zombies, so you zombie people shut it.

As with artificial intelligence, the concept pre-dates the word, which didn't come about until 1960 (in an article about human-machine systems in space). In the 1840s, Edgar Allan Poe wrote "The Man That Was Used Up" about a man that has been so damaged, has to use so many prostheses, that he has to be put together every morning before anyone can see him. "He's more machine, now, than man." (No, that's not from Poe's story for anyone that's wondering. It is, however, what immediately came to mind.) However, it was Jean de la Hire who is attributed to creating the first literary cyborg in 1908 with the character Nyctalope from The Man Who Can Live in the Water.

Edmond Hamilton may be more responsible for bringing cyborgs into fiction than anyone else, though. In his novel The Comet Doom (1928), he has characters that are a mesh of organic and machine parts which enable them to operate in outer space, the very thing that was cited in the scientific article in 1960 in which the term cyborg originates. He is also the first person to use the term in a piece of fiction in his 1962 short story "After a Judgment Day."

Possibly, the most famous (earthly (because, let's face it, it's hard to actually get more (in)famous than Darth Vader (yes, he's a cyborg))) individual cyborg (as opposed to a cyborg race like the Cybermen or the Borg) is Steve Austin from the novel, you guessed it, Cyborg from 1972 by sci-fi author Martin Caidin. The book was adapted into the television show The Six Million Dollar Man and its spin off The Bionic Woman. Several sequels to the book followed.

Cyborg systems are a thing of the now even if not in ways that would cause us to think of people as cyborgs. Our current emphasis is to use these systems to restore function to ailing body systems (as with artificial hearts) or replace lost limbs. Prosthetics are not so simples these days as they were when they amounted to just a hook or a peg. Many of these artificial limbs could be capable of enhanced performance; we just don't do that. Yet. I'm sure that day is coming.

As soon as it's shown to be profitable, that is.

But cyborgs aren't limited to people, even if that's what we think of when we think of cyborgs. We think of this: 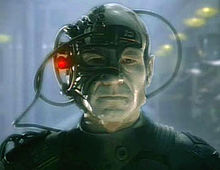 But, really, this also counts: 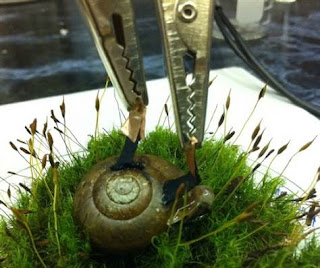 Yes, that is a snail. A cyborg snail. Yes, it is real. And it's kind of scary. You can go read all about it here. It's scary because cyborg insects seem to be a big deal to the military. Yeah, you can step on them, but it will mean that anything could be a surveillance device. Anything. [And, since that article is about sustainable power, I also saw an article about robotic jelly fish (robojellies or something like that) that have sustainable power (but I didn't keep the link).]

All of that to say that cyborgs are here. Now. Maybe not all around you, but they could be. And sooner than you might think.
Posted by Andrew Leon at 10:57 PM