The A to Z of Fiction to Reality: Bertie Bott's Every Flavor Beans

Some ideas are so good they deserve to have a life outside of the pages in which they came to life. J. K. Rowling's Bertie Bott's Every Flavor Bean is one of those ideas. 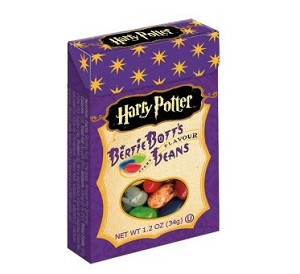 I mean, I loved the chocolate frogs, but, really, it's still just chocolate. [yeah, yeah, I know... just chocolate... you know what I mean. The frog doesn't get up and walk around, so it's just chocolate.] And the trading cards with the moving pictures? Well, we sort of already have those. But Bertie Bott's... what a neat idea! It's the kind of idea I wish I had come up with. [Of course, Rowling had a lot of those ideas, clever ideas, that all of us wish we'd had.]

So, yeah, the actual candy treat that Jelly Belly came up with is not quite as good as the "real" thing, but it's as close as we're likely to get without real magic being involved. And you can't say they haven't come up with some interesting flavors. 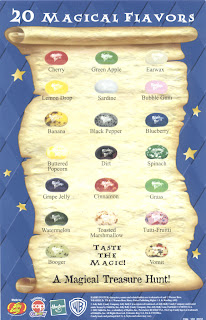 Well, those are just some of the early flavors. Horseradish isn't on this list (and I like horseradish), but a horeseradish bean is one of the few things I've put in my mouth that caused me to run to the bathroom to spit and then want to scrub my tongue. Truly, truly nasty.

Of course, that was years and years ago, and I haven't had any of these since then (being a sugar-free (mostly) house tends to diminsh the opportunities for tasting vile candies). I looked over a list of current flavors, and a few really stood out:
bacon bagel, baking soda, caterpillar (How did they determine the flavor of caterpillar? Do caterpillars all taste the same or is it dependent upon what kind of butterfly they'll be? If so, what kind of caterpillar is the Bertie Bott bean?), copper, glue (every child's favorite), lucozade (because I have no idea what this is), mayonnaise, mucous, rotten egg (because smelling them isn't bad enough), sulfur (because it smells like rotten eggs, so what does it taste like?), and toe nails.
If you want to see a full list, you can go here. Well, I don't actually know if it's a full list, but it's the best list I could find.

I'll just leave you with this:
"Ah! Bertie Bott's Every Flavor Beans! I was unfortunate enough in my youth to come across a vomit-flavored one, and since then I'm afraid I've rather lost my liking for them -- but I think I'll be safe with a nice toffee, don't you?"

He smiled and popped the golden-brown bean into his mouth. Then he choked and said, "Alas! Ear wax!"
Posted by Andrew Leon at 11:01 PM