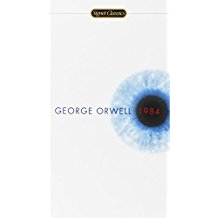 I first read 1984 in 1984. I was in 8th grade, and I suppose my teacher thought it was appropriately timed, though I do think 8th grade was the normal time to have the book assigned anyway. Maybe. At any rate, I remember reading the book and having thoughts like, "Isn't it great that someone wrote such a great warning for us so that this can never happen here." And that seemed to be the consensus, even from the teacher: This will never happen here.

Oh, how wrong we were.

No, I'm not saying we're full on living in Big Brother world, but, in many ways, we have taken our first steps toward it. And I'm not just talking about how we're (the USA) the most surveilled nation on the planet, either.

Here's an example:
In the book, the proles (the mass of common people) are kept uneducated, just enough education so that they can do the menial labor jobs they need to do. This serves multiple functions, but the primary ones are that the uneducated tend to question authority less and do as they're told more. It makes them unquestioning of their lots in life so that they don't rise up in revolt. When they're told that their lives are better than the people's of days past, they accept it and are thankful.

At this point in my life, though, the thing I probably find most interesting about the book is the stuff about language, because Orwell has been proven, yet again, to be ahead of his time. The idea of Newspeak in the book is to reduce language to a point where things like freedom and equality aren't even concepts, and we, today, tend to think that that's kind of a dumb idea. I mean, you can't get rid of concepts, right?

Well, let me give you another example:
Anthropologically speaking, all cultures started out with only two colors: light and dark, or white and black, depending on how you want to say it. Other colors didn't exist for those people. You might think that's crazy talk because, if you look out the window, clearly, you can see a whole range of colors: blues and greens and reds and all of these colors that are just part of our world. Clearly, those colors exist, right? Well, sure, from an objective, scientific standpoint, those colors, the wavelengths for those colors, exist, but those people didn't see those colors, not the way we see them; conceptually, they were just lights and darks. But over time, other colors got added in, and it was actually an expansion of the world for those people.

See, here's the thing, and this is a science fact: Language changes our brains. How we speak and what we speak affects our brains and how we see the world and interact with the world. Learning other languages and new patterns of speech changes the "wiring" in brains and causes us to see the world differently. [So does reading, by the way.] So this concept in 1984 where they remove the ability from people to think of freedom and independence by removing the concepts from the language is not very far-fetched. It's not far-fetched at all.

And, hey, Trump is doing a great job of reducing language. And rewriting facts and history to suit his own agenda, another thing covered in the book.

I mean, it's like the GOP read 1984 and decided that they could use it as their own, personal playbook.
"...a hierarchical society [is] only possible on a basis of poverty and ignorance."
That sounds like them to me.
"...human equality [is] no longer an ideal to be striven after, but a danger to be averted."

So, yeah, this book is still vitally important and everyone should be reading it. The thoughtpolice, though not quite real in the sense they are in the book, are growing in power, and a huge segment of the population have fallen under their sway and believe every fabrication and alteration that comes out of their mouths. Right now is a time for clinging to facts and truth and upholding them because "reality" isn't as objective as we'd like to think it is. In fact, reality is only as objective as we make it, and we can't allow Trumpism to bend and warp the truth of the world around us into the madness he'd like to make it.
Posted by Andrew Leon at 12:00 AM