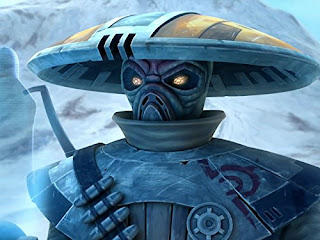 -- To love is to trust. To trust is to believe.

Padme has proven to be a very difficult character for the writers of the Clone Wars series. Obviously, she's a character they felt obliged to include, but she doesn't have a place in the action of most of the series, so most of her appearances, like this one, have shoehorned her into stories where she didn't belong. That doesn't mean that some of those stories haven't been good, anyway, but my reaction always tends to be, "What? Why is Padme doing this? She's a senator!" But in this arc she's acting in the position of some kind of bank investigator. I mean, doesn't the Republic have people for this?

It would have been much more interesting if there had been some kind of ongoing political story line that involved her and her role as a senator. That would have made sense.

None of that is to see that this is not going to be a good and/or interesting arc, but I'm still having issues with Padme in a heist plot where she's the one breaking into the bank vault. Sort of.

All of that and the return of Clovis, Padme's ex who betrayed her and with whom Anakin has... issues. As we know, Anakin doesn't handle jealousy well. As my wife said, "Man, he's a real dick." Seriously, Anakin is the jealous boyfriend/husband no one wants to have.

Also, those banking clan dudes are just freaky looking.
Posted by Andrew Leon at 12:00 AM