A Deepness in the Sky (a book review post) 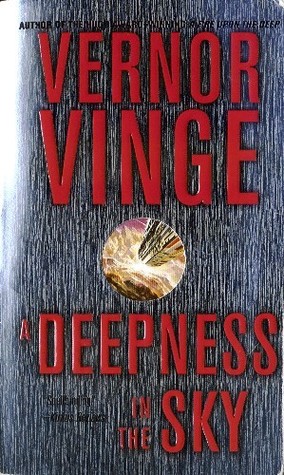 Wow, it's been a whole year since I reviewed A Fire Upon the Deep. If you remember back to that book, I said I was only going to read this one if it was better, and it was better, better enough that I wanted to know what happened even though I had some major issues with the book going in. And this one was slow, too, but not quite as slow as Fire. But let's just cut to it...

The first major issue with this book is that it's barely related to the first book in this "trilogy." Vaguely. Like, there's a character... Well, it's like going to a party somewhere and meeting someone who is your very distant relative through marriage. Or, maybe, two marriages. Like, you know, the divorced spouse of your fourth cousin twice removed. That's how related this book is to the first book. They're both set in the same party, um... universe, but there's really no connection other than that.

Which is probably part of why I liked it, because I thought the first book was, for lack of a better word, stupid.

Which is not to say that this book doesn't also have a strong dose of stupid, the main one being a star that turns itself on and off. Yeah, like it has a switch, except that it's on a timer. So for a couple of centuries, it's a faintly glowing dwarf somethingorother, then it will flare to life and burn bright for 50 years or so then go back out. And, somehow, there's life on the planet that orbits the star, highly evolved life, that has adapted to this pattern, something we're not even going to touch, because the problem is the star.

There is no explanation offered for this. It's just some mystery of the universe. Or, maybe, it's an alien artifact. Whatever. We don't care enough to try and find out, and the author doesn't offer any kind of rational explanation for it. Because, you know, physics, and physics doesn't allow for something like this, so the author didn't bother other than that it enabled the plot he wanted.

Look, if you're going to make up some piece of stupid shit like this for your story, you need to at least offer some kind of explanation as to why it exists. Well, unless you're Lewis Carroll and your whole book is full of the absurd.

The next major issue I had was the aliens. There's a problem with aliens in sci-fi and that's that almost always the aliens turn out to be just humans in costumes. Metaphorically speaking. The aliens act like humans, think like humans, pretty much are humans except for the fact that they look some other way, though, frequently, they're also based on bipedal symmetry, just like humans. I have a philosophical difference with this approach to aliens. BECAUSE THEY'RE ALIENS! If they're aliens make them act... I don't know... like... ALIEN! In some way! Make them different other than just cosmetically. Vinge completely fails to do this with his spider creatures.

Look, I get it: Aliens are hard, but at least make the effort. Rather than make the effort, though, Vinge makes excuses and tries to pass it off as the humans (in the book) anthropomorphizing the spiders as they learn about them, and that does work for certain sections of the book BUT there are clearly sections where the humans have no relation to what's going on with the spiders, and the spiders still act just like humans. He barely ever mentions the fact that they extra limbs. It's like they're just hanging around useless... like they would be if it was a human in a spider costume.

For all of that, though, the story was interesting enough to keep me involved, which says a lot about it considering the fact that I came into it with the idea that it needed to do something right away to get me to keep reading it. Mostly, that had to do with the characters, which were much better than the characters in the previous book. I especially liked Sherkaner Underhill; he's probably the reason I kept going at the beginning.

Actually, there are a lot of good and likable characters in this, just don't get too attached to most of them. Vinge is a bit like George RR Martin in that respect. They are all the characters who must die to prove the situation is serious. Or they all could be, and you never know which ones will make it through.

The book is also incredibly topical from a political standpoint, and that part I found very interesting. The political conflicts among the spiders, with their truth-denying conservative faction undermining the more progressive scientific community is somewhat engrossing. It wouldn't have surprised me if dogmatic religious spider had started saying, "Climate change is a hoax." That narrative is definitely worth a look considering the current status of American politics.

But is the book, as a whole, worth reading? I don't know. I would just skip the first one for sure if you think you might be interested in this one. Since this one serves as some kind of "prequel" for the other one in that it happens chronologically first, it might even be better to read this one first. But, really, unless you're just into hard sci-fi, I would give these books a pass. I'm not going on to the third book (but, then, it's the actual sequel to the first book, and I didn't like any of those characters, and I don't care what happens "next").

Last note:
Having said all of that, I do have some ideas about how this book relates to the first book in a more substantial way, but there's no way to verify any of it; it's all speculation on my part and, although it would be neat, it also doesn't matter, not to the story. Maybe if there's ever a fourth book and Vinge pulls all of these threads he's left lying around together, maybe, I'll read that one; otherwise, I don't plan on reading anymore Vinge.
Posted by Andrew Leon at 12:00 AM