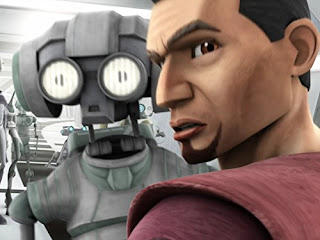 What is life?
And is it yours?
I mean, that's one of the fundamental questions, right? And it's a question becoming more and more difficult to grapple with, especially as we become more and more able to produce life on our own terms. This question they deal with in the Clone Wars about whether the clones are independent beings or just property isn't really hypothetical anymore. We could clone people at this stage. To a certain extent, we can even make them to order. Are they property?

And, for that matter, aren't my kids just products? It's not like they made themselves. Or raised themselves.

So where do we draw the line?

It seems not even the Jedi have an answer to this one. One the one hand, there's Yoda, who seems to see each individual clone as an individual, independent being; but, on the other hand, you have some Jedi who see the clones as no better than droids, just biological machines.

It's hard to tell precisely where Shaak Ti falls on the scale, but she seems to lean more toward the "we own you" side of things.

All of these are the conflicts driving Fives to go rogue in order to figure out what killed his brother, Tup. Because, sometimes... actually, frequently, especially in this day and age of corporate law and Trumpism, doing the Right thing means going against the establishment. And not because there's any kind of conspiracy, but because of things like implicit bias. That's really what Fives is up against, the bias in the system against clones because they aren't full people. Probably, they only count as 3/5 of a person.