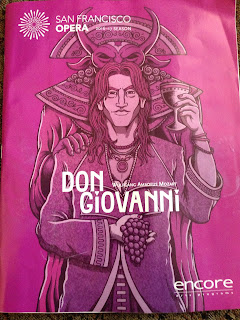 At long last, we're finishing up the 2016 opera season at the San Francisco Opera! We have three this month (June, as I write this), the first of which is Don Giovanni by Mozart.

Don Giovanni is rather appropriately timed considering our political climate. Not that Don Giovanni is at all political, because it's not. However, it is about a man, Don Giovanni, who has no control over his impulses and has no problem with the idea of grabbing a woman by the pussy. Or a girl, for that matter. He's a noble, a star, and expects to get to do whatever he wants, which is mostly how it goes for him.

Until he kills someone.

Look, Giovanni is so smooth (and rich, because you can't leave out the influence of money) that he walks into the wedding of a young couple and walks out with the bride after sending the groom on his way.

You should also keep in mind that this opera premiered in 1787. More than 200 years later, it's one of the top 10 most performed operas worldwide. It is, after all, Mozart.

Being Mozart, the music is very solid, but none of it really grabbed me. It's the kind of stuff that would, say, make great background music, but there's none of it that I wanted to sing along with. So to speak. Because I'm not likely to ever be singing along with opera. That's just a bit beyond me.

My experience so far with Mozart (this is my third Mozart opera) tells me that he's very good at "sidekick" characters, and this was no exception. The character of Leporello provides the comic relief, and Erwin Schrott gave an amazing performance. He was easily my favorite even though Ildebrando D'Arcangelo, as Don Giovanni, was also great.

Generally speaking, all of the performers were great... with the exception of Stanislas de Barbeyrac as Don Ottavio. de Barbeyrac had that problem of standing in place when he was singing and not emoting at all. Even when other people were singing. He tended to do nothing more than stand around on stage when he was on stage. It was kind of weird considering that all of the other performers were also acting their parts but this one guy just stood there looking bored all the time.

The set was also kind of... well, I don't know. It was almost cool but, then, it fell short. They had these large mirror/screen things on the stage that they did some interesting things with, but one of the things was projecting images of people onto them. So, like, when Don Ottavio is singing of his love for Donna Anna, there are images of her in the "mirrors" as he sang. But that's really the only scene where they effectively used those. At other times, a face might pop up and would be gone within moments; considering that there were at least half a dozen of the "mirrors" on the stage most of the time, it always made me wonder if I missed something because I was looking at some other part of the stage. Overall, I think they were underutilized and a distraction rather than adding anything to the production. Wasted potential.

So let's get a bit spoilery.

Don Giovanni is completely unrepentant about his lifestyle. He uses and damages people and considers it his right to do so. He never apologizes. [Does that sound like any orange gremlin you might know?] At the end of the opera, Giovanni is visited by the man he murdered. Giovanni somewhat inadvertently invited the dead man to dinner, and the dead man accepted the invitation. Not that Giovanni expected him to actually show up despite the supernatural occurrence in the graveyard. But the dead man does show up and explains to Giovanni that there are bad things coming for him unless he repents. Giovanni, being true to his nature, refuses... and gets dragged into Hell because of it.

Now, seriously, who does that remind you of? This philosophy of not apologizing but always hitting back harder only goes so far, and I think some prominent people in our government (>cough<Trump>cough<) are about to find that out.
Posted by Andrew Leon at 12:00 AM