The Point of Dissent

When I was young, my mom used to tell me things like, "Don't rock the boat," and, "Don't speak up; it won't do any good," and, "Just go along; it's easier that way." This was never an idea I was able to buy into, even at a young age, probably because I had a string of really great teachers from 4th through 6th grades, teachers who taught me that it was not just okay but good to question authority.

Don't get me wrong; I don't mean questioning authority just for the sake of questioning authority. I mean that you don't accept something just because it's being told to you by someone "in authority." Of course, the fact that I grew up in a house where my father expected to be believed "because he said so" didn't leave me very inclined to think anyone in authority knew what they were talking about.

By high school, I was quite adept at "asking questions" when I thought the person in authority was wrong. That translates into, "I was very good at pointing out when the person in authority was wrong and asking for the data." This was something that especially happened at church where I found out that in most circumstances, because I did my own studying and research, I was the authority on whatever subject we were studying. More so than any of the Sunday school teachers, more so than the youth pastor, and more so than even the pastor in many instances. It was very common for both my pastor and my youth pastor to say to me, "I'm not going to tell you you're right, but you're not wrong."

I felt good about bringing these things up, about dissenting with what was being said, because, frequently, it led to a redaction of false information and/or a correction of what was being taught.

Which brings me to the point of dissent... 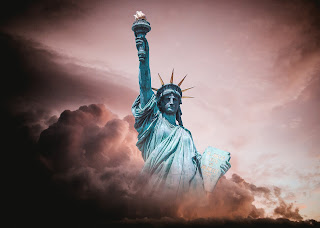 It brings me to the point of dissent and, more specifically, why you should bother.
(And I'm not going to elaborate much here; I'm just going to go through the points I want to make.)

1. Dissenting can cause people to take a second look at the information being offered and catch errors that might not otherwise come to light.

2. Dissenting in a matter of a position (such as a political or moral position) [see this series of posts] clearly states which side you are on, which can be incredibly important [just ask all of the Republicans in a couple of years when they lose their spots in the House for not standing up to Trump].

3. Dissenting can give others who agree with you but who are staying quiet the courage to stand up along with you. Sometimes, it takes only one person to stand up and do the right thing to give other people the strength to also stand.

Look, folks, we're at a crux in history. It's not a dissimilar crux to that of the one that caused the American Revolution. There are a few corrupt but rich and seemingly powerful people in control, but there aren't really that many who agree with them, even among those who supposedly agree with them. It's time to dissent.
Rebel.
Resist.
Posted by Andrew Leon at 12:00 AM