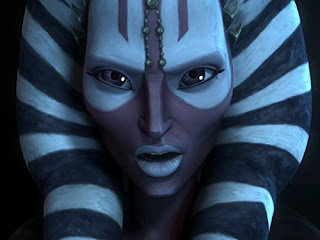 -- The popular belief isn't always the correct one.

But it is the job of the security forces on Coruscant after Fives take flight after a frame up to make it look like he was trying to assassinate Chancellor Palpatine. And, of course, we know it's a set up, and that's part of what makes this episode so difficult to watch. We know who Palpatine is, and we know how those around him are playing into his hands, and we want to yell at Shaak Ti, "No! Don't do it! Don't leave Fives alone with him!" But she doesn't listen to us.

To say this episode ends tragically is an understatement, because we now know just how close the Jedi came to finding out about Order 66, how close one clone came to changing everything...

For me, that makes Revenge of the Sith even more sad.

Aside from all of that, it seems pretty clear to me as of this episode that Count Dooku had no idea that Darth Sidious and Palpatine were one and the same. Interesting...