We Are Not Your Machine

Let's imagine for a moment that you have a great machine. When I say machine, I mean machine. This is a purely mechanical contraption, no electronic parts. No internal computer. Nothing digital about it. 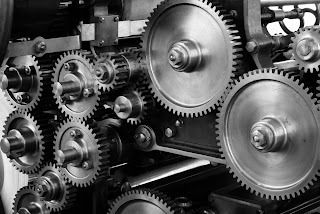 It's all gears and cogs and nuts and bolts.

Machines are fairly straightforward devices, even the delicate and complex ones. I mean that from the stance of that when a piece wears out or breaks, you remove it and put a new piece in its place. The old piece is, at that point, a piece of trash.

Machines are built with a purpose, to do a particular task, even if that task is purely ornamental. But they only work if all the parts are good.

It is this view, the inherent view of people from corporate America (and the Republicans), that makes them disdainful of the "unproductive members" of society. "Unproductive members" equates to "broken pieces" of the machine. And what do we do with broken pieces? We throw them away. We do not keep them around as clutter, and we certainly don't "take care of them." That's just wasted resources.

And you wonder why the healthcare plans being offered up by the Republicans are so bad for the sick and elderly and poor...? Really? You wonder about that? These "people," because the Republicans barely view them as people, are a waste, a drain. They suck up resources that are more deserved by "productive members" of society, i.e., the rich, the 1%, the [leaches]. [Yes, let's feed the parasites even more.] So you're cries of, "But people will die if you take away their healthcare," do really fall on deaf ears because, you know what?, that's the actual idea.

Get those broken pieces of the machine out of society!

Of course, then, the problem (it's not a problem) is that we are not a machine. We are not some great biological wealth machine for the rich despite the fact that we've allowed them to turn us into one. [Over and over and over again throughout history, I might add.] That's the actual problem, we have allowed them to use us as this, and we need to stop.

Well, that's part of the problem. There's also the part where the "Christian" (because they're not really) Right, the Evangelicals, have abandoned charity and mercy in favor of the more hard-line Pauline philosophy of "if they don't work, don't let them eat." And they've taken up this philosophy because it fits in with the whole "God rewards [with money!] the just and worthy, and punishes [by taking away their money] the sinners." So, you know, if you're having financial difficulties, it's because you're a lousy sinner being punished by God and, if you'd just "get right with God," he'd reward you financially and you wouldn't need any charity or mercy. [These people are fully behind Trump and the Republican agenda, just by the way.]

No, I don't have "an answer" to all of this or how to deal with it, but I think "the answer" begins with people realizing that they've been "turned into" a money-printing machine for the wealthy. People need to realize that they are not cogs, not pegs, at least not round ones. Not even square ones.

If people are pegs, they are all strange pegs. At least, that's how we all start out, with weird little growths and arms and awkward angles and edges. Unfortunately, many of us spend our years as parents trying to take of the edges and angles of our kids and make them into these unified little round pegs that can grow up and fit into any hole. If not that, we don't do anything to stop the education system from doing that for us.

But it's time to stand up for the things that diversify us, differentiate us, make us unique. We are not pieces of a machine, and it's time that we stopped acting like we are.
Posted by Andrew Leon at 12:00 AM