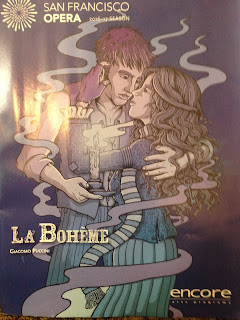 Roughly translated (okay, not so roughly), "la boheme" means "the bohemians." It's loosely based on characters from a series of short stories by the 19th century French novelist Henri Murger, and, when I say "loosely," I do actually mean it.

Giacomo Puccini, having been himself a starving artist at one point in his life, felt a great affinity for the characters of his opera and, evidently, caused a lot of frustration with his librettist because he kept changing the words. He seemed to be a believer in the "ask forgiveness, not permission" philosophy. You can't argue with the results, at any rate. La Boheme is one of the top operas in the world more than a century after it's introduction and has been the most performed opera at the San Francisco Opera House.

As such, any production of it seems to have a really high bar it needs to meet with the critics. This being my first viewing of it, I have no such bar, and I thought this production was great.

First, the set was great.They did a great job of putting together something that looked like a studio apartment being shared by four poverty-stricken artists: a poet, a painter, a musician, and a philosopher. But, even better! The apartment piece of the set separated and turned around to form the city streets. It looked nice and gave the right feel.

Then, the cast was great. All of them. The opera has a lot of comedy in it despite the fact that it's a tragic love story and, as such, requires some serious acting. This is definitely not an opera that would work if the performers just stood in place when they were singing. They were all great. I can't even pick out a favorite.

Here's where it really works for me:
When Picasso first went to Paris, he was exactly one of these starving artists. His first winter was so hard that he was forced to burn all of the paintings he had thus far produced so that he wouldn't freeze to death. It's a horrible thought. The opera opens with Rodolfo and Marcello burning the manuscript to one of Rodolfo's plays just so that they can have a little heat. This production did a good job of making that real, of making the poverty and the desperation that goes with it real.

Not just in that they had no fuel for the fire and no food but, also, they had no access to healthcare. You could make a case for this being a play about poverty and how people with no access to healthcare deal with illness: They try to pretend it isn't there. Rodolfo knows immediately upon meeting Mimi that she's not well, but what are they going to do? There's no money for a doctor. And Mimi? Evidently, she's been dealing with her illness for so long that she's able to pretend even to herself that she's perfectly fine -- "It's just a little cough." -- so she's surprised, later, to find out she's sick.

But, you know, no one has ever died from lack of access to healthcare.

The only complaint, and it was a small one, was from my wife. She said Mimi and Rodolfo spent too much time looking at the audience during their love duets rather than at each other. I didn't notice, but, because they provide viewing screens for those of us up in the nosebleed section, I may have been watching the screen instead of the stage and I wouldn't necessarily have noticed that particular issue.

What I can say for certain is that La Boheme is definitely an opera I want to see again. In fact, I would go back to see it again today if I could, and we just saw it last night (as I write this, not as you read it). Puccini is my wife's favorite opera composer, and I can definitely see why. I don't know that I have a favorite at this point, but Puccini definitely wrote some of the most memorable opera music ever written.
Posted by Andrew Leon at 12:00 AM