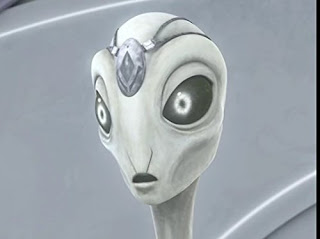 -- The wise benefit from a second opinion.

The Jedi have sent Tup to Kamino to find out what caused him to assassinate Jedi Master Tiplar. This is somewhat like Brer Fox throwing Brer Rabbit into the briar patch. Not that it's exactly the Kaminoans fault. Apparently, they really just don't "get" the Jedi and don't understand that "Lord" Tyrranus is a Sith and not part of the Jedi Order. And it doesn't really seem to bother them that they are taking secret orders from one "Jedi" that they must not let any of the other Jedi know about.

Or maybe they just don't care because why question the money?

At any rate, it puts the Kaminoans at cross purposes with the Jedi and, specifically, Fives.

Fives, of course, doesn't much care for anyone else's agenda if it puts Tup, his best friend, in danger, and he's willing to do whatever it takes to save Tup's life, a life the Kaminoans plan to end to cover up the fact that clones have inhibitor chips in their heads put there at the behest of the Sith.

Again, this is a great arc and one of the most significant ones in the series. You should do yourself a favor and watch it.

Also, the droid character AZ-3 is a good addition for the episode. Its relationship with Fives is interesting to watch.

One other interesting note: There are empty seats on the Jedi Council. I'm not sure if they've shown that before, but there are at least two seats empty during a consultation in this episode.


"I always wanted to have human feelings. But I do not. Goodbye."
Posted by Andrew Leon at 12:00 AM