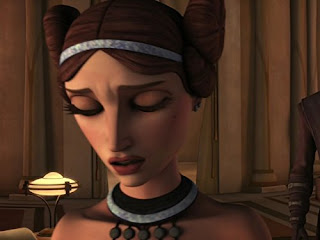 -- Jealousy is the path to chaos.

What I said last episode post notwithstanding, this episode is good. Tense. In part, it's good because Padme is back in an environment that makes sense for her to be in; mostly, it's good because we get to see into the dynamic between Anakin and Padme, which is something there hasn't been much of throughout the series.

Remember when Revenge of the Sith came out and Anakin and Obi-Wan had that big duel mostly because Anakin thought Obi-Wan had something going on with Padme? Some people got upset about that because they thought there was no way Anakin would just turn on Obi-Wan like that. They don't know people very well, is all I can say. And it's not like Lucas didn't set Anakin up to have rage problems, and people with rage issues tend to also have jealous-rage issues.

We really get to see Anakin go off into a jealous rage in this episode.

Oh, and spoiler alert:
Padme breaks up with him.

Really, though, what we're getting to see so far in season six, both in the previous arc and this arc, is the culmination of Palpatine's plans. Come on, everyone knows whats going to happen, but these are well done enough that you're really hoping things will go the other way.