All of that said, I have just, I mean just as in less than 15 minutes ago (as I write this) finished reading the best book I've read all year. Really. Possibly in the last two years. Heck, it may be the best book I've read since The Sparrow (and Children of God), and that was a while ago. What you should take away from this is that it was great. So let's get to it.

The book: Demetri and the Banana Flavored Rocketship
The author: Bryan Pedas 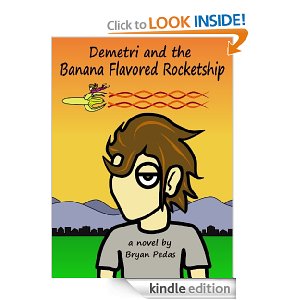 As always, let's start with the technicals. Which will be extremely short as this is the best edited independent book I've ever seen. Other than mine and maybe better than mine. The House on the Corner is a lot longer, though, and I'm not gonna take the time to run a percentage comparison. Let's just say that Demetri is close to flawless. I only remember one dropped word in the whole book, which is extremely impressive, and even the commas where pretty right on with no distracting mistakes. The editing gets a good solid A bordering an A+. Maybe an A+. Let's just say I was impressed.

The writing is incredible. The only drawback is that the premise of the story may be a barrier to some readers. It's like the movie Lars and the Real Girl, beautiful and completely under appreciated. I understand the under appreciation, because I can understand that people see what it's about and respond with "that's dumb" without ever giving it a chance, and Demetri is like that in some ways, but it's also a beautiful story, and people who dismiss it because of its premise will be missing out. And, no, I'm not going to tell you about the premise, you can clink the above link and go read it. You'll be one step closer to buying it that way, and you really should buy it.

Here's where I knew I had something beyond just the good on my hands:


Flip-flops echo on a darkly stained tile floor as the fluorescent lights give a sleepy-eyed flicker, bathing Demetri in stale light. The faucet water runs yellow--maybe it's being kissed by the light, maybe it's always been that color--and fills his hands on its way up to the sharp, patchy stubble beneath his cheeks and chin. A row of bathroom utensils lay along the counter like surgical tools in a low budget horror flick, and Demetri reaches past the toothbrush and the nail clippers to the disposable razor, which is anything but "disposed of" in its five years of dull, rusted life.

That's in the first chapter, at the 2% mark according to my Kindle app. The image is vibrant and paints an enticing image. It's one of those passages that I look at and just think "wow, that's excellent writing." I knew I was going to like the book at that point, and I wasn't wrong.

There are times it made me LOL. Literally, I mean. I tried not to, because Demetri is not for kids, and my kids were around, and they always want to know what I'm laughing at if I happen to be laughing, but there were several points in the book where I just could not hold it in. Like when Demetri receives the crate. So there are those  moments of humor that are hard not to respond to, but the book is also very touching, and you really want Demetri to pull things together.

What is most surprising, though, is the amount of tension I felt as I approached the end of the book. I really didn't know where Pedas was going with the story, and I kept envisioning all these horrible things that could happen, and that's a pretty impressive feat for a book that is, essentially, a dark comedy. And, no, I'm not going to tell you whether you will like the ending. Go read it! I mean it.

There's only one real drawback the book has: the title. But, here's the thing, I like the title. The title is appropriate. I just think that it puts a barrier between the work and a lot of readers, but it gives an impression of the book that it is, well, juvenile, and it's totally not. So, if you don't know what you're getting into, you might think you're getting something that you're not, and a lot of people that might like the book may skip right over it thinking it's something geared toward kids. I don't really have a better idea for the title; I just think that, knowing most readers, they will let it get in the way of reading the book.

Title aside, I give this book an A+. The main characters are real and fully realized as are many of the side characters. A few of the side characters are caricatures, but they are the caricatures that we know and have had to deal with in real life, so they never come across as stereotypical. This is a great book, and I hope it gets the attention it deserves.
Posted by Andrew Leon at 10:56 PM