The Happiest Place on Earth: Part 3

Some of us got up early on Friday, because the plan was to get into the park ahead of the crowd. That was actually a possibility, because we had these passes that let us in an hour before the parks opened. However, when I say that "some of us got up early," what I mean is "I got up early." In all actuality, I didn't get up any earlier than I usually get up, which is 6:00am, but everyone else was supposed to also get up at 6:00am, and that just didn't happen. By the time everyone had been dragged out of bed (kicking and screaming, in some cases (okay, so I'm exaggerating a little (but only a little))), showered, and dressed, it was 7:30 before we got into the park, and we still had to eat breakfast. Clearly, we didn't have this whole thing figured out. By the time we got some food, it was 8:00am, and the park had opened for real and we'd missed the whole hour of extra time we'd had. 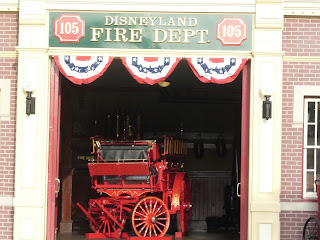 which I thought was SO cool. See, I took a picture of it! But, seriously, it's an old fire engine; what's more cool than that? Okay, lots of things, but, still... Anyway, so I was being all "wow!" over the fire engine, and there was this old guy washing windows nearby, and he saw me being all "wow!" over the fire engine and the fire station and stuff, and he came over and told us that Walt Disney himself had lived in the apartment over the fire station while the park was being built and that he'd used it as his room for years when he'd come to stay. That was pretty cool, and I'm guessing a bit of inside info that most visitors don't get to hear about. Yeah, this guy was old enough that I bet he's been working at the park since it was being built and knew the information first hand. It was that kind of experience.

The first ride we went on on Friday morning was 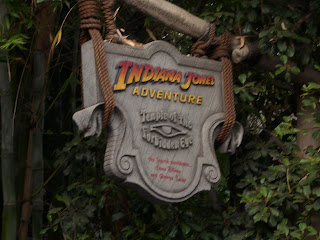 and I have to say  that the line, which, actually, was almost non-existent at 8:00am, was just as good as the ride. The detail they put into the place was amazing, and there was so much to look at, but we were able to just rush through, so it wasn't until we came back to ride it again (on Saturday) that I was actually able to fully take in the details of the line area. 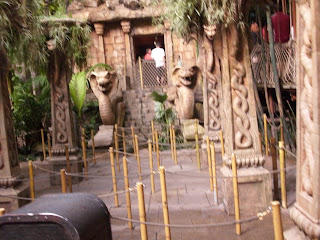 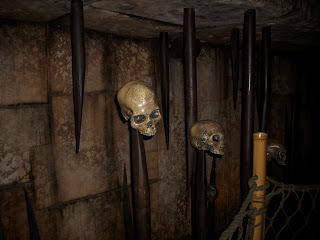 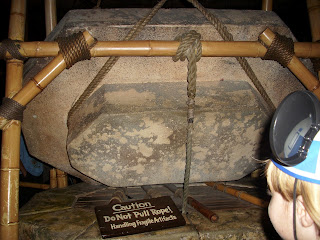 Of course, all the kids had to pull the rope.

After Indiana Jones, we went up into Tarzan's tree house. 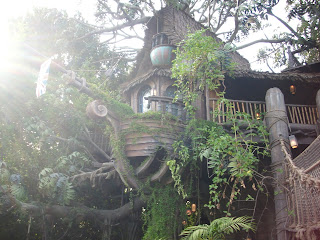 We explored the jungle. 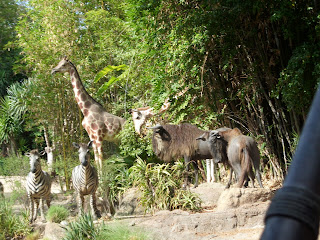 And we rode a steamboat. 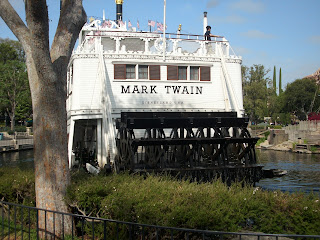 We did some other things, too, but, well, my camera decided it didn't want to work anymore. Oh, it works again now, but that was the end of the pictures for the trip. Friday morning, it just decided that it was taking its own vacation and refused to turn on again. Yes, I checked the batteries. I'd actually just put fresh batteries in not long before it quit working. After we got home, I was able to upload the pictures I got before it died, which I wasn't sure was going to work since the camera wouldn't function. I swapped out  the batteries again, just on a whim, and something in the combination of those two things made the camera decide that it would work again. But I have no more pictures...

Which means I don't have pictures from Cars Land, which is... Oh, man, I wish you could have seen it! It was like they pulled Radiator Springs right out of the movie and brought it to life. But, you know, with people walking all around in it.

So we're sitting over at Flo's waiting for my wife's dad and step-mother, and, across the street, at the traffic cone hotel place is Lightning McQueen. Now, he's just sitting there, so, you know, I'm thinking he's a decoration. Just a model car sitting out in the driveway. But we're sitting there, and, suddenly, he comes to life and starts driving out of the driveway, and he's talking to people as he goes by, and it was just incredible! He pulled through the driveway and turned onto the street and drove right by us, and I wanted to reach out and touch him so bad, but, you know, if I was all famous and stuff, I wouldn't want people I don't know coming up and trying to touch me, so I refrained. Anyway, he drives off, and, a moment later, Mater drives up the street from the direction Lightning had gone, and he goes over and parks in the same place, and it was all SO COOL! I mean, it was seriously cool, and I can't even imagine what that would be like if I was six and Lightning McQueen drove up to me and talked to me. Well, I can, because it would have been about like Luke Skywalker walking up to me and talking to me, and I used to dream about that kind of thing all the time when I was that age, so, apparently, I can actually imagine it.

We rode The Tower of Terror, and that was amazing. The hotel is awesome! I mean, well, it's  like everything there; the attention to detail is stunning, and it's like being in some abandoned hotel, and we wondered if they have some guy somewhere that just specializes in putting cobwebs on things or if they actually hire spiders to take care of it. At the time, I didn't know this, but it's not just a simple drop ride. No, Disney was not content to be satisfied with something as simple as gravity, so the car that you sit in actually has cables that pull it down so that you achieve a speed faster than free fall. Riding that with my wife and younger son was awesome. They're both into screaming, but, see, my wife would scream and then burst into hysterical laughter, so I was laughing at her laughing, and my son was screaming but trying to also laugh, and that may have been the best ride of the trip with the way she screamed and laughed.

The boys and I went off to the Mad Tea Party while the rest of the group went off to get wet. I'm not a fan of wet rides. Well, it's not the rides; I like them just fine; in fact, when I was a kid, the log ride may have been my favorite thing; however, I hate walking around wet after the fact, and if the stuff in your wallet gets wet... and I hate having wet shoes. It's just gross, especially later when you finally take your shoes off. Anyway, we were trying to see this Tron thing that they had when the oldest boy was there in the spring, but it's gone, now, and has been replaced with the Mad Tea Party, which was pretty cool and included a band playing 80s covers with a lead singer that looked like Tom Petty. But the coolest thing there, and the thing I regret most not having pictures of, was these two guys on stilts wearing pink flamingo bodies so that they looked like they were riding giant pink flamingos. And they jousted. It was awesome.

But, you know, my camera was on strike, so I don't have any pictures.
Posted by Andrew Leon at 9:58 PM