The Happiest Place on Earth: Part 1

I've never had a huge attraction to things Disney. That's not to say that I don't have my movies: Robin Hood and The Fox and the Hound are still two of my all time favorites. But Disney was never a thing for me. That may have been due to the butchered versions of The Black Cauldron and The Secret of Nimh they released when I was a kid. It's hard to hold any special fondness for the butchers of two of your favorite books.

But that didn't stop me from wanting to go to EPCOT Center when it opened in 1982. I had absolutely no desire to go to Disney World, but I desperately wanted to go to Epcot. That never happened. In 1987, Star Tours opened, and I wanted, even more, to go to that! I mean, it was Star Wars. But, in 2010, they shut Star Tours down to re-design it. I was bummed about that. I'll never get to experience the original Star Tours  attraction. But I still had hope to go to the new Star Tours. That's the only reason I've ever wanted to go to Disneyland. That and the exclusive Star Wars action figures the Star Wars store there has.

Several years ago, the kids' grandmother took them to Disneyland, and they brought me one of these: 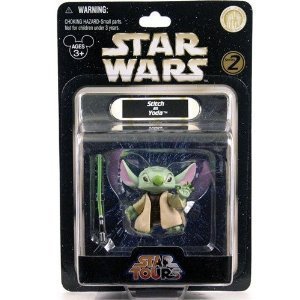 It's awesome! But it made me want to go even more (and get all of the figure series).

Earlier this year, my oldest son got to go to Disneyland to perform with his choir (where they received a gold medal ranking), and he got to go on the new Star Tours and brought this back: 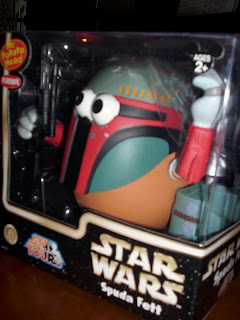 I just have to say that I love all the collector's editions of the Potato Heads. I have, well, probably, more than I should. Spuda Fett filled me with a renewed desire to go to Disneyland just so that I could buy the whole Star Tours collection of them. My wife did not find it amusing.

I still had no real interest in Disneyland in general, though. I figured it was overpriced and overrated. Besides, I've been to Six Flags. I mean, I grew up within driving distance of the real Six Flags, which has a lot of attractions and Texas color and isn't all about the rides. Why would I need to "waste" money on a trip to Disneyland? You know, other than Star Tours. And the Indiana Jones ride, but that wasn't as big a deal.

Earlier this year, the grandparents (my father-in-law and his wife) decided to take the kids to Disneyland this summer. During the ensuing conversation, I mentioned that I'd never been to Disneyland. It was an innocent comment, especially so since their grandmother (not the grandmother that took them the previous time (that had been my wife's mom)) had asked me a question that I couldn't answer because I'd never been. It never occurred to me what kind of an uproar it would cause. As it turns out, I was the only one in the family that had never been to Disneyland, a fact my wife knew but neither of us thought particularly important as my wife had not much care for Disneyland, either, a fact that just reinforced my attitude toward the place since she had been there before.

At any rate, a whole new plan was conceived. A plan that involved the entire family going to Disney. People were excited. Well, honestly, 6 of 7 of us were excited. Even my wife got excited. I was looking forward to finally getting to go on Star Tours and going to the Star Wars store, but, really, I didn't have any particular care about the rest of the trip. It was a necessary evil to accomplishing my Star Tours goal.

That trip was last week.

I can't say how wrong I was. Sure, Disneyland is a big commercial enterprise, and they really do a good job of enticing people into spending money. I mean it's a massive money suck, but, oh! it's so much more. But you'll have to wait for Part 2 for the rest... 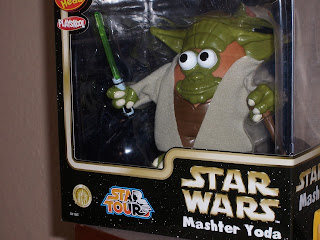 I wasn't able to get all of them, but I got the most important one!
Posted by Andrew Leon at 10:14 PM