The Happiest Place on Earth: Part 4

It's interesting how the Happiest Place on Earth can be accompanied by so much drama. There was a lot of drama. Mostly, it had to do with shopping. Or swimming. It was a lot more than we wanted while at an amusement park, though. Drama and whining are distinctly unamusing.

The hotel, the California Grand that I mentioned in part 2, had a big pool with a big twisty slide, and my daughter wanted to spend time at the pool. The boys didn't want to, and I'm not really a big swim fan, so I didn't want to, but it became apparent that my daughter just wasn't going to be happy if she didn't get to swim, so, initially, we decided to split up the group: the boys and I would stay at the park, and the girl and my wife would go to the pool. The grandparents would just go take a break, which, on Friday, involved a nap. I kind of envied the nap. Anyway, it became more apparent that she would be even less happy if we split the group up. Basically, we all needed to be on her page, which became the least painful option. But it all worked out. I used the pool time on Friday and Saturday to write (a story which should be available soon-ish), and, Saturday, we had lunch at the pool, all seven of us, and that was fun.

There was still the shopping drama, though. Oh My Gosh, the shopping drama! All the kids had money to spend that they'd saved up for the trip, plus they'd been promised some spending money from their grandmother. They didn't know how much or when it would happen, though, and that drove them crazy. And me. And my wife. Because they wanted to GO SPEND their money but also, especially my younger son, wanted to know what they (he) were getting from the grandparents so that they (he) could figure out what (Lego) to buy.

Yes, we went to Disneyland so that  he could spend money on Legos. Yes, Legos that he could buy anywhere. But they had this cool Lego store in the Disney Mall area with these huge Lego sculptures! And, oh!, how I wish I had pictures of these things, but it was after my camera went on vacation. There was a huge Lego dragon on top of the store breathing green fire down on a Lego knight just like in Sleeping Beauty. I think that was the sculpt that has over 1,000,000 bricks in it. And there was an Aladdin and Jasmine with Genie on a flying carpet hanging inside the store, and a life-size Sully and Mike (from Monsters, Inc) by the doorway outside, too. My sons loved that store, and we had to drag them out more than once. Even my daughter got into the whole Lego thing, and she's (mostly) uninterested in Legos.

At any rate, my younger son is always completely paranoid that anything he wants to buy will sell out before he gets to buy it, so he always wants to buy whatever it is NOW NOW NOW! But he didn't actually know what he was going to be able to buy, and the not knowing drove him (and us) crazy. Until Saturday, that is, when he finally got to do his shopping. To be fair, he did also construct his own lightsaber at Star Traders, and that is something he could only do at Disneyland.

And, then, there were the pins. In the end, everyone got into the pins. The pins are SO cool, and they have so many really neat ones. I wanted to buy ALL the Star Wars pins. The whole pin thing is its own saga, but (probably) I will never write that. However, here are some pictures of the pins we came home with. 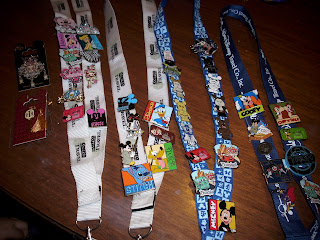 Oh, on Star Tours, one rider each time gets pegged as the "rebel spy." I didn't know anything about this going onto the ride. Rather, I did, vaguely, because my oldest son (who had ridden it before) tried to tell me about it, but he's not always the best at that kind of thing, so I came away from that discussion with, actually, negative knowledge. Yes, he actually sucked information out of my head through all of that, but, then, I think my kids do that to me on a regular basis. At any rate, the fact that there is a rebel spy on your ship is the reason the Empire is chasing you, and, when we did Star Tours the first time, my oldest son was chosen as the spy, much to our surprise and his overzealous excitement. After being the spy, he felt the need to buy as many items related to being the spy as he could afford, so he bought a t-shirt and this pin (which is almost the same as the shirt except smaller): 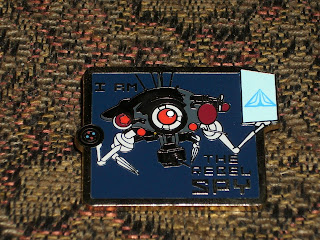 And this is the pin that kind of actually catalyzed the whole pin craze (my father-in-law bought it for the younger son): 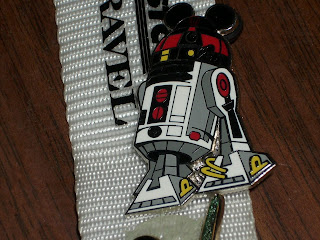 My daughter's favorite of hers: 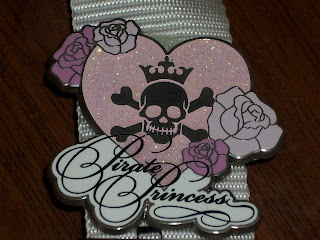 There was this one theme at Star Traders that they had all kinds of items for. There was a mug, but it wasn't quite tall enough; if it had been, I would have bought it, because I need a back up mug, but, maybe, the shortness is appropriate. There was a t-shirt, an action figure, a bobble-head, and I don't remember what all else, and I had to have something with this on it, so, eventually, after cycling through all the options several times, I settled on the pin: 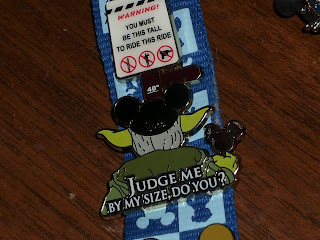 All of that to say that the pin collecting thing they have going is pretty fun, but it's fairly expensive, too, because there are just so many pins. They do have trading there, and you can get some really good pins if you know what you're doing, but you have to really know what you're doing. I did manage one fairly nice roundabout trade: 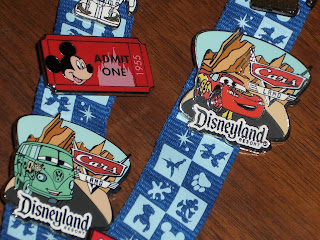 We each got a Fillmore pin (lower left corner) with our Disney package. It's a limited edition pin (a lot of the pins are limited edition, as most of them are only produced for one season), which is cool, but we had five them, so my younger son decided to trade his away. He actually made a bad trade with his pin from a collecting stand point, but he got one that he wanted, so I didn't say anything about it. However, I was later able to trade the pin he got in the poor trade (because I got him a duplicate of it in a set) for the Lightning McQueen (upper right corner) pin which is a highly sought after pin from Cars edition pins. The thing is, the employees have pins that they have to trade if they are a designated pin trader, so she had to trade it to me and actually commented on how good a trade it was.

But I've gone on for much longer than I intended about the pins, which I only meant to mention, but they actually became an important part of the trip, so I'm leaving all of this stuff in.

Other things that were really cool:

They have this light and water show at night which involves spraying sheets of water into the air and projecting film clips onto them. It was incredibly cool

We went to see the Aladdin musical, and that was incredible. I think it was better than the movie. The guy playing Genie was hilarious. The sets and props were magnificent. If you ever get down to Disneyland, you should definitely make time to go see it.

The Haunted Mansion is amazing! We looked up some stuff about it later, and they do all of that with mirrors which just blew me away, because they have ghosts dancing around and stuff right through solid objects, and it was just WOW! I really want to go behind the stage and look at how that's done!

Pirates of the Caribbean was a lot of fun. It has a place where they do film projection onto a sheet of fog or water (I don't remember) which is like what they did at the light and water show. I know they've modified the ride since the movies have been out, so it made me wish I'd been on the original.

All of that aside, possibly the most interesting thing about the trip had nothing to do with any of this. As I've mentioned, we don't do a lot of eating out, and we don't (usually) do much sugar. However, this was an eating out trip. You don't really have an option. We did the equivalent of a couple of years worth of eating out in 5 days on the trip to Disneyland. But my daughter, well, my daughter is enamored with eating out. She always wants to do it and always wants store bought processed crap over the much healthy options that we make at home (especially when it comes to bread). Several times during the trip, my daughter ordered French toast for whatever meal we were having (yes, it's one of her favorite things), and, each time (and some of these were kind of expensive places to eat), she said "dad's is better." That was surprising and gratifying to hear, because stating a preference for anything I make at home over something we buy somewhere else almost never comes out of her mouth. The boys, yes, but never her. That, hearing that from her (more than once (or, even, twice)), may have been the best part of the trip for me. Yes, even better than Star Tours. Maybe.

As it goes with things like this, as we were leaving on Sunday morning and hanging out in the mall area and doing our last shopping and looking and all of that, the question came up, "What was better Trinity lake (see my Let's go on Vacation series) or Disneyland?" Even the kids had a hard time with that one. It's like comparing nectarines to apples. So the question became, "If you could pick just one to do again, which would it be." The kids did better at that one and immediately piped up with "Disneyland!" They like the apples, and, yes, Disneyland is the apple of amusement parks (Six Flags is only the pear). I do like apples, but I had to go with the nectarine, and here's why: when we got back from Trinity lake, I felt rested. It was a great, relaxing trip. When we got back from Disneyland, I felt like I needed a rest. At this stage in my life, as much as I enjoyed Disneyland (and I did), if I had to choose, I would pick the more peaceful and relaxing choice (especially since mornings at Trinity involved sitting on the deck with my mocha and writing). Still, if I want an apple, a nectarine is not a substitute; it's just that, more often, I want a nectarine.

We'll just have to wait and see what develops for next year.
Posted by Andrew Leon at 7:45 AM