It's Time for Accordions

This last weekend was the Cotati Accordion Festival. It was #22. In some ways, that astounds me. 22 years of festivals. I mean, the accordion is not the most popular of instruments, although I do think it's highly underrated. I have to blame the monkeys and their little cups. 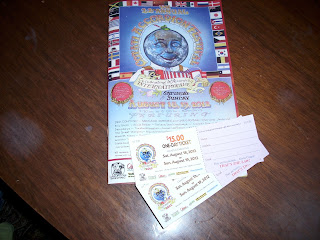 This was her second accordion festival. Last year, she only played in the group performance of "Lady of Spain," which she really didn't know very well, but she could get away with it, because it was just a mass of people playing it, and, probably, half of them didn't know it, either. This year, though, she played on stage! 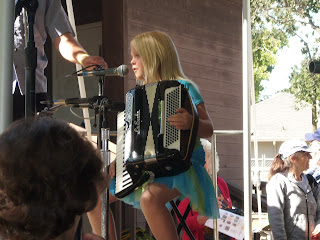 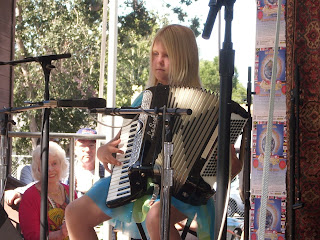 She was part of a group of "future accordion stars;" that's her teacher in the lower left of the bottom photo. She played the song "Over the Waves," which is her grandfather's favorite. And she had her very first interview. 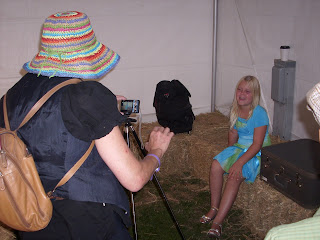 I'm not really sure what the interview was for, but, still, it was cool. She even got asked for her autograph.

The Great Morgani was there. He played four times and in a different costume each time. Unfortunately, we only got to see him once. His costumes are amazing! (Last year, he had one of a big, green butterfly (but I don't have pictures of that one.)) 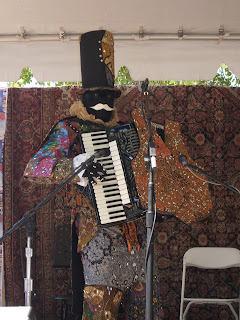 My daughter also got to meet and have her picture taken with Santiago Jimenez. 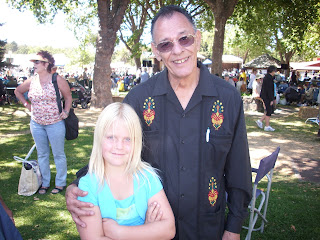 He's kind of legendary and has been Grammy nominated three times. We didn't get to see his actual stage performance, but we did get to hear him play at his tent.

There were also the Accordion Babes, but I was busy buying food for the family while they were playing, so I didn't really get to see/hear them other than to note that one of them was dressed up in some Celtic warrior outfit with a leather miniskirt. They have calendars. 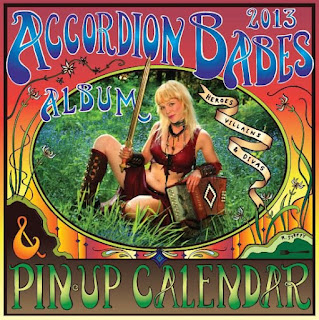 They debuted this calendar at the event, but you're seeing as much of it as I've seen, which is this picture of it. They announced that this year's calendar is kind of racy, but I don't know what that means. At any rate, I'm sure they'd love for you to buy one, if you're so inclined.

I'm sure there was a lot more to see and hear, but we were only there for half of Sunday out of the two days of the event. My wife and I are hoping that next year we can actually stay late enough to hear some of the major performers.

Oh, and one other note:
On Friday afternoon, my daughter played for an hour in front of a local grocery store as part of a promotional thing they do every year for the festival. She played for it last year, too, although her song library was much shorter then. Anyway, during that hour of playing, she made over $45.00. This was her third time to go busking. I'm fairly certain her total haul for the, basically, three hours she's spent performing like this is more than I've made off of my book stuff. Maybe, I'm in the wrong line of work? Then, again, I'm not young and cute, so I'm not likely to bring in the kind of money she does.

We're incredibly proud of what my daughter has done in  this past year with her accordion work. Her teacher says she's one of the best she's ever taught, and she's been teaching for something like 40 years, so it's kind of a big deal. Even though we often have to fight with her over practicing, it's really been worth it. I'm not sure if she'd admit that, but she already has an eye for new accordions. She already owns two.
(Accordions aren't cheap... just sayin'.)