When I was a kid, I had a ritual of sorts. Every summer, I would collect locust shells. They weren't really locusts, though; they were cicadas. Evidently, people are allowed to call them locusts because they just do it, but it's always bothered me ever since I realized what an actual locust is. But I digress...

Every summer I would collect these: 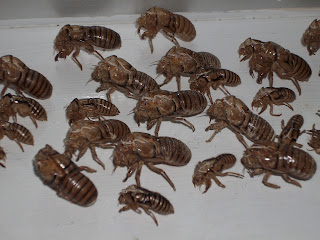 My son collected these on the camping trip.
I would fill up grocery bags and grocery bags (back when grocery bags were only paper) of them. At the end of the summer, I'd count them all up (I kept a record of this for several years) to see how many I had and, then, spread them out all over the sidewalk and stomp on them just like bubble wrap. Although I'd mentioned this to my kids before, they didn't really understand since we don't, to my knowledge, have any cicadas around here. At least, if we do, I've never seen (or heard) any sign of them.

However, while we were on our camping trip, I happened to spot a few of the shells, and I showed them to my kids. My younger son became fascinated by them, and he (we) started gathering them up whenever we came across them. I think he brought more than 50 shells home with him.

But that's not the interesting part...

The other thing I used to do when I was a kid was to go out in  the evenings and look for them coming out of the ground so that I could watch them shed their skins. It was fascinating. And I told my kids all about all of the collecting the shells and watching them hatch and all of that, and, of course, my younger son desperately wanted to see that happen, too. I didn't make any promises. It was never an easy thing to find them, and I was lucky if I found two to watch hatch in a summer.

But! But it just so happened that on the evening of the day we found the first shells that I found one crawling up to the cabin in the fading light of sundown. He was ecstatic. I went and put it on  the outside of the screen on the backdoor of the cabin so that he could watch it from inside. Then, as I was walking back around to the front of the cabin, I almost stepped on a second one! So that one joined the first.

All the kids watched them for a little while, but the youngest and, then, the oldest got bored with how long it was taking and went to bed. But my younger son stayed up and watched the two cicadas shed their skins, grow their wings, and become entirely different creatures. Here are some pictures of the process: 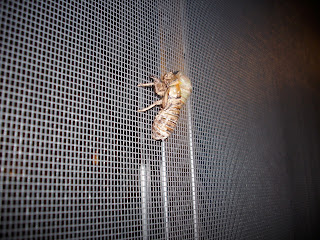 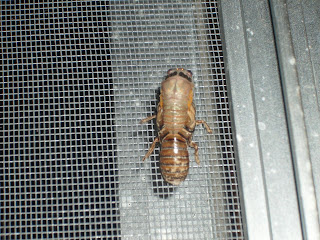 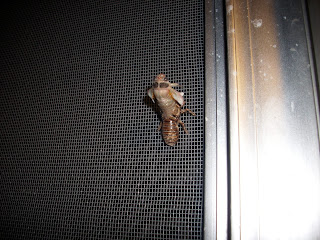 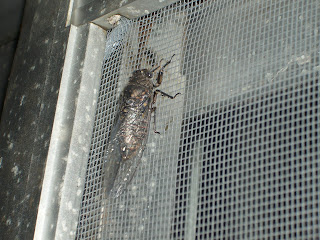 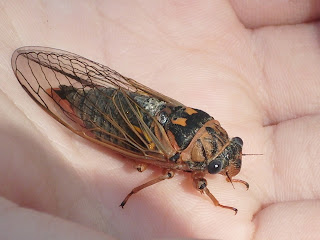 Yes, that is my son holding one of the cicadas in his hand. I was impressed that he was willing to do that, because it's not usually his thing, and, actually, he turned down the opportunity initially. He was so fascinated by them, though, that, in the end, he couldn't resist.

It was really great to be able to bring a bit of my childhood to my kids through this experience, and they all three thought it was pretty neat even if it was only the middle one that had the same kind of interest that I had as a child.