One night last week, when we were out on the evening walk with the dog, we came across a rabbit in a field off the trail. Actually, it was a hare, but people always get so confused when you talk about seeing hares or wild hares, so, you know, we'll keep it simple and just call "him" (because I'm deciding it was a him) a rabbit. I'm sure he doesn't really mind, because, well, he can't read. I hope. Because, if he can read, humanity may be in trouble.

Anyway...
We were out walking; my wife and I were way ahead of the pack of kids that were lollygagging with lizards and naked ladies behind us. 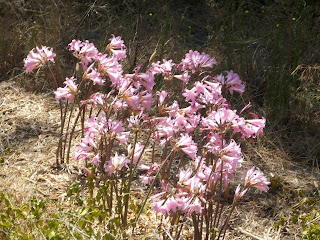 This kind of naked lady. Yeah, I know what you were thinking...
Out in the field on  the other side of the fence, was a rabbit. It was sitting up with its very long ears sticking straight up, and we stopped to watch it. The tall grass in the field beyond probably starts about 60' or so away from the trail, and the rabbit was about midway between us and the grass. (and I wish I had a picture, but I wasn't carrying the camera) The girls, my daughter and her two neighbor friends, were making a lot of noise, so, as they got close enough, I called out to them that there was a rabbit. Now, this was meant to be the signal for them to approach quietly, you know, like Elmer always says; however, it actually resulted in a mad dash toward us and even more noise, and, of course, the rabbit scampered away. It did stop just before hopping into the tall grass, so they did get to see it, but it's not like they got to observe it the way my wife and I (and dog) had been before they crashed in on us. Even the dog knew to be quiet.

So, last night, there was a squirrel. I love squirrels. I've probably mentioned that before. He (yes, he gets to be a he, too) was sitting up in a branch on a tree eating and chattering away. 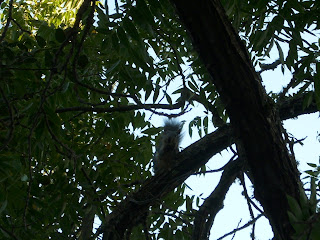 Unfortunately, he was too far away for my flash to do any good.
My daughter was, again, lagging far behind, because she was looking for lizards, but my wife and I had stopped (with the dog and the younger boy), so she came running up making a ton of noise, and the squirrel dashed off farther up into the tree (so I didn't get a chance to try and get a better picture). She got to see the squirrel, but she was sad she only got to see it running away.

Is anyone seeing a pattern here?

At that point, my daughter wanted to go ahead of everyone else to see if we could find the rabbit again. I left the dog with my wife and younger son, and my daughter and I went off ahead wabbit hunting.

Yeah, seriously. She told me I was mean for telling her that she was being too loud to see the animals. So I explained to her about how the rabbit had run off when she and her friends had come up because of all the noise they were making, and I explained how the squirrel had run off because of all the noise just she had been making. Really, she knew that stuff, but I had to remind her of it. After that, I asked her what was more mean, to tell her that she was being too loud or to allow her to keep being too loud which would mean that she wouldn't be able to see the animals. She mumbled out something about wanting to see the animals and that I wasn't really being mean to tell her she was too loud. She just didn't like it.

I'm hoping that some of the more astute of you are seeing where I'm going with this, because I was immediately struck with the similarity to the way that people react to bad reviews and negative critiques. The reaction is almost always that the reviewer/critiquer is "being mean." The act of telling someone that they are being "too loud" is seen as some malicious act when, really, it may just be that the reviewer person is trying to help the reviewed to "see the rabbit."

Yeah, sure, I know some people are just being mean, but those usually aren't accompanied by the "why"s. In a review, if all you get is "this piece sucked! It was the worst piece of crap ever written!", you might be able to say that the reviewer was just being mean. Not always, though. However, when a reviewer takes the time to say, "I didn't like this and here's what didn't work for me," you can probably be pretty sure that s/he is not being mean but trying to point out some issues with the writing that legitimately need to be improved.

Just like me telling my daughter she was being too loud. She had a goal; she wanted to get to observe the animals, but her goal was not being achieved because she was being so loud she was scaring them away. It was an act of kindness borne from the desire to help that prompted me to tell her that she would need to be more quiet if she didn't want the animals to run away.

In the same way, if I give a review that points out mistakes in the grammar or story structure, it's not out of any desire to "be mean" but is meant as an assistance to the author so that s/he doesn't scare the readers away with the noise of bad grammar, poor punctuation, and weak plots. No, I can't speak for everyone, but I would imagine that anyone out there that's taking the time to say, "hey, this story didn't work and here are the reasons," is not doing that out of spite or any desire to be mean or to hurt someone.

I think it's time we, as a culture, stopped being so adverse to being told we're doing it wrong, to having our feelings hurt, to taking correction. It's the act of being told what we're doing incorrectly that helps us to get it right so that we can achieve our goals.

And, no, we didn't see a rabbit that night, but, if we had, my daughter was being quiet enough that it wouldn't have run away.
Posted by Andrew Leon at 10:45 PM