School and "The Kitchen Table"

Well...
Here we are at the beginning of another school year. It seems like the summer has just burned away like early morning haze. One moment it's there, the next it's gone. Not that it's not always like that, but, this summer, it was even more so, because we did so much stuff. As a family, we took two trips this year, which is two more than we took last year. Or the year before that. Or the year before that. You probably get the picture. In fact, in the last nine years, these were trips #2 and #3 for the family, so, I suppose, that means we are averaging one trip every three years.

My younger son took an additional trip to scout camp which was his first time to camp and his first extended trip without us. He got to kayak, which, surprisingly (to me, anyway), he loved. That's really the only thing we've been able to get out of him about the trip other than that, yes, he did earn his swimming merit badge. And he got to cook one of the meals which everyone complimented him on.

My oldest son is off, right now, on a trip to Maine with his other family, but he often gets to do travelling that we don't. The perks of two families, I suppose. Last summer, he went to El Salvador.

Anyway...
Somewhere amidst camping, Disneyland, the fair, fireworks, sleepovers, and, well, everything else, I managed to get some writing accomplished. Not as much as I would have liked, but, still, it wasn't a wasted summer on the writing front. I finally got all of my hand-written material into the computer, made some progress on Brother's Keeper, made a lot of progress on Shadow Spinner, got parts of Shadow Spinner ready for serial release, and wrote an entirely new story that's part of a long term project I've had bouncing around for a while. It's about... well, that would be telling. It will be coming up soon enough.

Now that school is starting, I should be able to focus a tad bit more on writing.
Goal #1: finish Shadow Spinner
I'd like to have the whole book out by the end of the year at the latest.
Goal #2: Brother's Keeper!
I have so many people asking me when this is going to be ready, so, as soon as Spinner is finished, I'm going to be concentrating on BK until that's done.
With school starting back up and the fact that I'll be reading The House on the Corner in another class this year (by request and not one that one of my kids is in (for the very first time)), I'm sure the "when's the sequel coming out?" questions will be bombarding me again.

Of course, there will also be blogging and my creative class, so, when I say concentrating, I don't mean concentrating in the strictest of senses but only as much as I can between whatever else is going on. I have hopes, though... I do have hopes.

Speaking of Shadow Spinner, "Part Two: The Kitchen Table" is now available! You can pick it up FREE today and tomorrow. 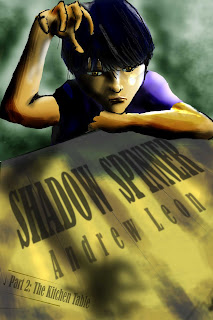 Here's the update:
"Part One: The Tunnel" got over 200 downloads during the three days I had it available for FREE! That was enough for it to peak at #26 on the contemporary fantasy free chart. It would be really great to get "The Kitchen Table" even higher, so let everyone know that they can get it for FREE on August 13th and 14th.

Now the catch:
Once you've downloaded "Part Two," please click the "like" button, and, once you've read it, please leave a short review and a rating. It would be a great help. Also, if you picked up "The Tunnel," it would be great if you'd hop over to that page and do the same. With over 200 downloads, it only has 4 reviews.

Oh, and stop by and let Rusty know what a great job he did on  the cover! Man, I can't wait to show y'all the cover to Part Five!
Posted by Andrew Leon at 10:30 PM