I don't know how it is for other people, but one of the main attractions of camping for me is the chance to see wildlife. I'm not a stranger to wildlife; I did spend a significant part of my youth on a farm in the country. Lots of deer. Lots of critters. Even getting chased by snakes. I've never grown out of that, except for the snake part. Even when a skunk moved in near our house, I had to hold myself back from going out to watch it shuffle around looking for food, because, really, it's just not worth the risk of getting sprayed.

All of that to say that I was really looking forward to seeing animals while we were camping. Even more than that, I wanted my kids to see animals. They're not as versed in wildlife as me, of course, because they've grown up in the city. Living near the creek here, helps, but not enough. My younger son, especially, is really into animals, and he's the one that never seems to be with us when we see wildlife.

I suppose we were only really marginally successful with the whole wildlife thing while there. There were lots of lizards, which made my daughter happy. She has a knack for getting butterflies to land on her finger, and she spent some time at the pool one day letting a couple of butterflies land on her. There were lots of squirrels, and our trashcan got raided the first couple of nights because my oldest son didn't put the lid down on it correctly. It was, um, probably raccoons, but I let the kids believe it was bears.

They did get to see deer. I don't think any of my kids had seen deer before. Well, maybe the oldest has, but I'm pretty sure the younger two had not. We got to see a doe with two fawns standing by the side of the road one day, but we were past before I even had a chance to think of grabbing the camera. My daughter and I chased a couple of deer on our bikes one afternoon, too. We weren't really chasing them; I was just trying to show them to my daughter, but she never did see them.

Here's a picture of a squirrel my wife and I watched run around collecting and eating on our last morning: 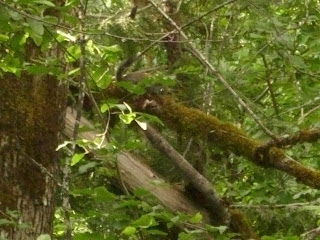 Do you see it?

And, now, a funny story:
We went out for a family walk one morning with the dog. While walking along the trail, we saw a squirrel. Well, my daughter and I saw a squirrel. The squirrels up there were quite a bit bigger than the squirrels we have around here but with shorter, stubbier tails. It was just a squirrel, right? No big deal. My wife and my younger son walked on because that was their reaction. My daughter got all involved in watching the squirrel,  though, and my older son came back to see it, but he couldn't find it. I was going to walk on, but, as I was walking off, my older son said, "Hey, dad, what's that yellow bird?" I passed the dog off to someone else and went back to see.

Indeed, on a branch, was a squat, yellow bird, but it was too far away, and I couldn't tell what it was. I had the bright idea of using  the camera's zoom ability to figure it out. Let me just mention here that my camera mostly sucks. It's zoom ability is almost non-existent. What I got was a slightly larger view of a yellow blur. [I had pictures of this, but they were too blurry, so I deleted them all. I wish I had kept one, at least, so I could show you the yellow blur.] My daughter was standing nearby going on and on about the squirrel and what it was doing during all of this, but we weren't paying attention to her, because we were trying to figure out what kind of bird the yellow blur was. My wife and other son were at least 100 feet away by then.

As I was trying to get a clearer, more focused picture, the yellow blur moved. It moved and turned into a squirrel. The yellow blur we had been watching was the squirrel's stomach fur. It had been sitting up on its hind legs eating, and the rest of it had blended into the tree. Except my daughter had been watching it the whole time, and she knew it was a squirrel. She started laughing at us for thinking the squirrel was a bird and kept saying, "I tried to tell you!" It was a major dork moment for my son and me.

Here are some other pictures: 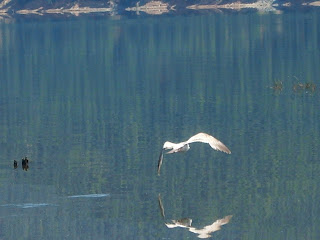 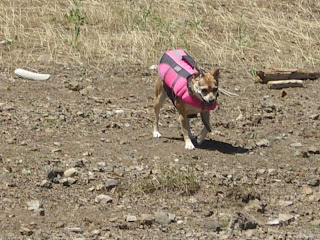 Okay, so she's not wildlife, but she is cute! 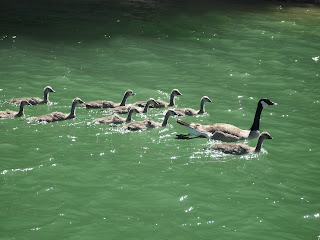 I'd never seen goslings before, so that was pretty cool. 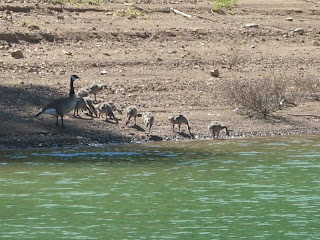 However, watching them on the shore reinforced how they are descended from dinosaurs. 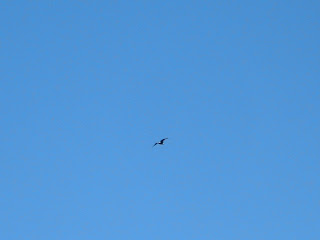 This last picture is of a bald eagle. It was the highlight of the wildlife experience. We got to watch it fly around for about half an hour. It had a nest in the tallest tree at the part of the lake where we were. It would circle around, fly away, and come back to its nest. I'm only assuming it was its nest, because it kept going back to the same tree. I'm also assuming it was fishing, but I don't know that as I never got to see it dive. The tree it was landing in was on a point sticking out into the lake, so I think it was going down on the other side from where we were. It was really cool to watch it flying around. Unfortunately, this is the only picture I have that is even remotely clear enough to see. If you look close, though, you can see the white of its tail and the white of its head.

I think that covers all the wildlife from this trip. My kids have still not actually seen raccoons, even though I've seen a couple around here in  the evenings out scavenging trash cans.
Posted by Andrew Leon at 11:02 PM