The Bedroom without the Window

Today is the day for the next Shadow Spinner release! 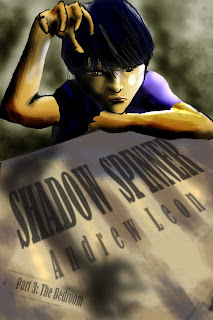 "Part Three: The Bedroom" will be available as a FREE! download Monday, August 27 and Tuesday, August 28. Don't miss out!
As an added bonus, I'm making "Part Two: The Kitchen Table" FREE! for today only. Pick up your FREE! copies, and, if you need it, go back and pick up "Part One: The Tunnel." Sorry, it's not free this time, but Amazon won't let me get away with it as much as I'd like to. If I could, I'd just make all of these free all the time, but Amazon seems to think that 5 days of FREE! out of every 90 is enough. Unfortunately, these are only for the Kindle, but there is a FREE Kindle app for whatever device you might need it for, so you should be covered.
Also, don't forget about "The Evil That Men Do." It serves as a prequel or a prologue or whatever you want to call it to Shadow Spinner, and it's only $0.99.

"Part Four: The Cop" has a planned FREE! release on September 10.

And I have to say it even though there hasn't been a lot of follow through with this (as in almost none), if you go pick any of these up, please click the "like" button and, then, come back after you've read them and leave a rating and review. It would be a big help. Thanks!

Something funny happened on  the way to the bank...

Okay, so I wasn't really going to the bank. And it's probably not all that funny to anyone but me, but, still... I'm gonna tell you anyway.

I lost part of the title for this week's Shadow Spinner release. Yeah... I'm not sure how that happened. The actual title is "The Bedroom Window," but, when I made the list of titles out for The Amazing Rusty Webb (I think he should change his name to that! It's so pseudo Spider-Man!), I listed part three as simply "The Bedroom," so that's, now, what it is. At least, that's what it is until I release Shadow Spinner as a complete book. Maybe, it will get changed back. I haven't decided yet.

As I mentioned last Friday, The House on the Corner: First Person Edition is a year old! There was also a contest... a contest that didn't really get any responses. Not that there weren't any comments, but no said, "hey, I want a free copy." So even though I said I would announce a winner today, I'll have to think about the whole thing. If anyone wants to make a case, today, as to why you need a free copy, please do that, and I'll add that in to the thought process.
Posted by Andrew Leon at 10:47 PM