I'm not a big fan of guns. I never have been. Well, that may not exactly be true. I suppose, when I was a kid, I liked guns. I do know that I wanted to go hunting. Everyone in my family hunted. Well, all the men did, at any rate (along with one aunt), which included my cousin who was three years older than me and my childhood idol. As far as I can remember, he always hunted, and, for all I know, that may have been true (knowing my uncle (because it was his wife that was the hunting aunt)). What I do know is that my cousin was hunting by the age of seven, because he got a deer that year. So I wanted to hunt, too.

For whatever reason, my mom really just blocked the whole thing, like she did with me playing any kind of sports when I was a kid (my brother both hunted and played sports). I got this whole thing about how I couldn't hunt until I had my own gun, but I couldn't have a gun until I learned how to handle one, but I didn't have a gun, so I couldn't learn how to handle one. It was all very frustrating to me as a kid. By the time my grandfather decided to just take me out hunting despite the fact that I had never held anything more powerful than a BB gun, I had really lost interest. That was middle school, probably 8th grade, in fact. I took a comic book with me, an edition of The Official Handbook of the Marvel Universe 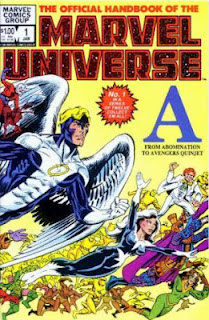 which was nice and thick so that it would keep me busy for a while, and we sat in the deer stand. We didn't see anything. I sat and read until it got too dark to see, then we walked back to the farm. I never went hunting again. I never learned how to use a gun.

Because I don't know how to use a gun, I don't own one. Of course, I have no intention of using one, so it would be rather superfluous to bother to have one in my house. That would just be asking for trouble.

I'm pretty sure most people don't approach the whole gun thing that way, though. After all, they look pretty simple to use, right? TV and movies make them look easy to use. Just point and shoot. Of course, the truth is  they are not easy to use, and they are certainly not easy to use responsibly. This leads to all sorts of problems too numerous to mention, but, if you're reading this, you're probably aware of gun issues whether you approve of them or not.

And that's the catch, because there are so many issues with guns, people are tempted to call the gun itself bad or wrong. The gun, though, is just a thing. As long as no one's holding it, it just sits on the table doing nothing.

But! But, to keep people from using them inappropriately, what we want to do is to say "no one should use guns." Forget being educated on proper usage and safety, just don't do it! And you know what, I get it. I understand that temptation. It's oh so much easier to prohibit than to teach.

Of course, there are legitimate uses for guns, not the least of which is protection against other people misusing them, not that I'm advocating owning a gun "for protection;" I'm just saying. The truth is that if I ever needed to use a gun, I mean needed to use one, I would be unprepared, and that would not be a good thing. That makes me think that gun safety courses should possibly be mandatory just like drivers education is mandatory.

Of course, it might not do much good; look at the number of automobile accidents we have every year.

At any rate, the point is that a gun is a tool. It's the user that determines what happens with it, which is the same for any tool. The problem with guns is that they are so powerful. Like pit bulls. [Pit bulls have not been shown to be any more violent than other breeds of dogs; however, when there is an incident with a pit bull, the victim tends to fare much worse than in other dog attacks because the jaws of a pit bull are so much more powerful than those of other dogs.] Because gun usage can end up being an all or nothing affair, people tend to react with an all or nothing attitude.

What we end up with is a bunch of people running around saying, "Don't use guns! Don't use adverbs!"

"Guns are bad! Adverbs are bad!"

Yeah, I just threw adverbs into the mix, because adverbs are just like that gun lying on the table. A thing. Neither bad nor good but very effective when used properly and very damaging when used improperly. But adverbs are so very easy to misuse and can destroy a manuscript, so what you get are people saying, "Don't use adverbs! Bad! Wrong! No!"

However, the correct position on adverbs is not abstinence but education.
Posted by Andrew Leon at 10:22 PM