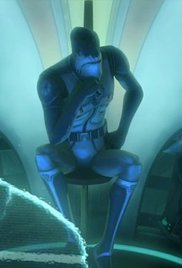 -- Only through fire is a strong sword forged.

Well... I still don't like Riff Tamson (the shark guy pictured above) as a villain. I don't remember having such distaste for him the first time I watched the series, but maybe I did and that's why I'm disliking him so much this time. Or, maybe, it's just that I'm not liking this arc much.

I suppose there was a call for this arc of episodes after the appearance of Kit Fisto fighting on Mon Calamari in the original series of Clone Wars shorts (2003). Admittedly, that was a pretty cool episode and seeing Fisto fighting underwater was a neat thing. But that was, what, five minutes or so, and sometimes that's all you need to have. There's not really much of Fisto in this arc, anyway. Not that he's not there, but the focus is mostly on Prince Lee-Char, and he hasn't grabbed me as a character. Which is, I suppose, the point, since this arc is about him learning to become a leader.

Yes, there are Gungans. It's not an issue and has nothing to do with my disenjoyment of these episodes. They're brought in as reinforcements after the Republic forces are defeated and forced to retreat into hiding at the end of "Water War" (the previous episode). It's nice to see them get their time as an underwater fighting force since we didn't get to see them fight in that manner in The Phantom Menace.

There's another episode in this arc, though, so you can probably imagine how it goes.

Oh, and the Separatists have another new droid thing inspired by an ocean creature, as if the jellyfish droid (which are still around) wasn't enough. This one is a big squid thing and is even worse than the jellyfish. It's a physics thing.

Speaking of which, and I understand this one intellectually, but I realized about halfway through the episode that everyone talks normally underwater in this arc. So, yeah, the humans have on underwater gear with helmets, so it makes sense that they would sound normal, but the Mon Cala, Quarren, Fisto, and Tamson all sound perfectly normal, as if they are in air, when they speak. I know they need the audience to understand, but what kid hasn't tried to talk under water at some point? Yes, that was another realization that niggled at me, like the Mon Cala women having breasts.


"Hope is something we cannot allow our enemy to possess."
Posted by Andrew Leon at 12:00 AM