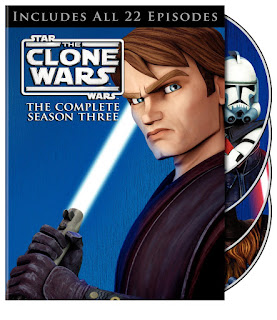 Season three is the only season that really makes the attempt to jump around in time; at least, if I'm remembering correctly, that's true. And from what I'm remembering at the time, people didn't respond well to the falling back to the past to tell other stories that weren't told initially. That's too bad, I think, because there is so much there. At any rate, I think season four goes back to a straight linear progression that's never deviated from again.

Unless I'm just not remembering, which is entirely possible. I'm not always all that linear.

This season has a lot of important stuff. When I say important, I mean it's important to the larger Star Wars Universe. Primarily, the Mortis story arc. As I said back in my review of the arc, this trilogy of stories provides more information about the fundamental nature of the Force than we get from any other source. If you're a Star Wars fan, this, being canon material, is a story you should see, whether or not like The Clone Wars itself as a show.

Savage Opress is also introduced in season three. He's the brother of Darth Maul, and his arc is interesting and exciting. And hints at some things that will be revealed later. This story line also deals with the fall from grace of Asajj Ventress and the fallout that happens because of it. Besides Savage, we are also introduced to the Nightsisters, a splinter group of Dark Side Force wielders. They will be back.

Duchess Satine returns for another series of appearances. I didn't like these as much as her appearances in season two, but it's good to see her again.

Tarkin is also introduced as a character in season three, and the groundwork is laid for the later relationship between him and Anakin.

Plus, there's some exploration into the lives of people who have sided with the Separatists. That's an interesting arc and deals with some heavy themes. It's well worth watching.

Overall, season three is a real winner, I think. The only off episode I can think of (without looking back at my reviews) is "Evil Plans." It's entertaining enough, I guess, but it has some real plot issues.

As far as single episodes go, I might have to go with "Clone Cadets" as my favorite, but it's outmatched when you look at some of the story arcs in the season.

Probably, you can still come into season three of Clone Wars without having seen the first two seasons and be just fine bit, seriously, just go watch it. It's a good show, and there are some things you shouldn't miss as a Star Wars fan. Of course, if you're not a Star Wars fan, it really doesn't matter that much.
Posted by Andrew Leon at 12:00 AM