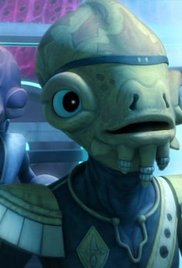 -- When destiny calls, the chosen have no choice.

As a complete aside:
The Mon Cala are a lobster-based life form [the Quarren are squid-like]. Now, think about all of the lobsters you've ever seen and tell me, by sight, which are the males and which are the females. You can't, can you? (I'm not looking it up, but I think it's a size difference.) So we see our first female Mon Cala in this episode and she... well, she has breasts. Um, why? These people have exoskeletons; how exactly can you have breasts that way? Yes, it bothered me to notice this. It just did.
Aside over.

This episode also introduces us to Riff Tamson, a shark-like being from the planet Karkaris. He's the Separatist ambassador who is stirring up trouble. I'm annoyed by this character, also. We already have sentient lobsters and squids on Mon Calamari, and they felt the need to bring in a sentient shark from some other planet? And he's the bad guy. The whole thing just feels too cliche to me. Not in a "I hate this" way, but it's certainly noticeable. Like a crack in your windshield that you learn to ignore but know is there.

The story itself is okay. Adequate. It's fairly standard in its setup with the Mon Cala siding with the Republic and the Quarren wanting to side with the Separatists. It, of course, leads to a great undersea battle between the clones and the Separatist droids. Right up until the introduction of the "invincible" jellyfish droids of the Separatists. [Yes, at that point, I found those annoying, too. I mean, why is that everything in this episode has to have some sea creature origin? There's actually no logical reason for the droids to look like jellyfish within the context of SWU itself. It's just there because of the arbitrary design scheme of the creators.]

Kit Fisto also makes an appearance, which is cool, except that he doesn't do much in this episode.

Don't get me wrong, it's a fine episode. Totally watchable. The stuff that annoyed me are not likely to annoy other people and have nothing to do with the story. Which is fine. Really.


"Today, you learned the hardest lesson a commander can learn: how to live to fight another day."
Posted by Andrew Leon at 12:00 AM