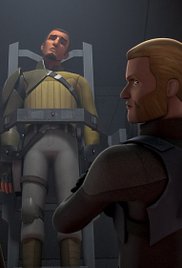 "I want a full sweep. Those rebels must be found."


As you can tell from the picture, Kanan has been captured. That's a backwards spoiler to the last episode. It's not my fault if you haven't watched it yet. Tarkin wants to know if Kanan really is a Jedi, because he hasn't bought into the hype and, just as in A New Hope, he's skeptical. He also wants to know how the rebel cell on Lothal is connected to other groups. Basically, he wants to know it all.

Of course, our merry band of rebels is hot to rescue Kanan and are trying to figure out where he's being held. The only problem is that, due to them, the Imperial communications network is down, so they're having difficulties accessing the information. Which delays their pursuit just long enough for them to get word from the mysterious Fulcrum to abandon Kanan for the greater good.

We don't really know anything about Fulcrum other than that it's some person Hera is sporadically in contact with and from whom they occasionally receive orders. That Fulcrum is a powerful enough character to tell Hera they need to sacrifice Kanan, the last known Jedi, for the greater good is a sudden boggle to the imagination.

And Ezra's just not going for it.

So begins our first prison break episode from Rebels. At least, that's what I'm assuming. We don't really get to that in this episode, but I think that's the direction we're headed.

It's a good episode. Very good, actually. They worked a lot of information into the 22 minute running time. It seems this series is finally geared to really take off.