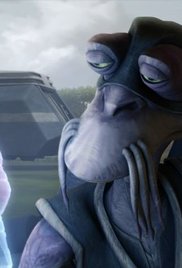 -- Who a person truly is cannot be seen with the eye.

After the horrible titles of the last three episodes, we finally get a good title. Of course, it has absolutely nothing to do with the episode. Seriously, the term "shadow warrior" never even comes up. Unless it was mentioned in the bit of dialogue during which my children were arguing, which would not surprise me, but, just in case that's what happened, I tried looking it up and couldn't find it referring to anything other than the title itself, so I'm going to go with the title having nothing to do with the episode. Which makes it kind of a wasted effort.

As you can see from the picture, we're back with the Gungans again. While doing my "shadow warrior" research, I found that this episode was originally meant to be the lead episode of season four, which in my mind would have worked much better considering the beating the Gungan army took on Mon Calamari. Here, the Gungan army, due to the machinations of the Separatists, is preparing to march against the humans to take over Theed.

I think I'm seeing a pattern. Quarren against Mon Cala, now Gungans against the Naboo. It makes me wonder if we're going to see more of this. At least this is just a one-shot and not a whole arc.

Which is not to say that this is a bad episode. It's easily better than the previous arc, and it has a few really great moments in it, like when Jar Jar comes face to face with General Grievous and plays with the height adjustment on his chair to cover his discomfort. That moment is a real gem. And the confrontation between Dooku and Anakin is good. Previously, Dooku took on Obi-Wan and Anakin simultaneously without any real concern but, this time, it's just Anakin against Dooku, and Dooku feels the need for droid backups. He is clearly worried during the duel.

The real issue with this episode is that it feels rushed. They could have taken out the middle segment of the previous arc and made two two-parters and done much better. That and the Gungans... well, the Gungans manage to capture Grievous, something no one else has been able to do, and that feels somewhat, I don't know, either forced or out of place. It's like, "No, look! The Gungans really are competent!" And I get that they want to make a statement that Jar Jar is not representative, but just sticking that in without giving us a basis for believing it makes it feel like one of Jar Jar's fumbles.
Posted by Andrew Leon at 12:00 AM