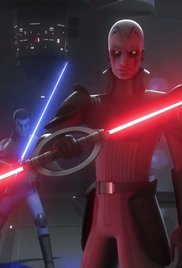 "Yep, you definitely missed me."


The rescue attempt continues, and I'm just going to say, right now, that this is going to be full of spoilers, because I'm not going to hold anything back.

This is the episode where everything takes off and the title of the show really means something. Which means that we find out that there are, indeed, other rebel groups working in a coordinated manner with each other spread across the galaxy and, actually, our rebel group is one of those groups. We get the confirmation that Bail Organa is a part of it, which, come on, who didn't know that? So not really a spoiler.

But we also get the reveal on who Fulcrum is, something I had figured out or, at least, hoped I had figured out, so it was great to find that I was correct. A very welcome confirmation, and I was going to reveal that, but I've changed my mind, You should just watch the series. It was quite gratifying to see the reaction of my kids to who Fulcrum is, which is why, I guess, I'm not telling you. You should watch.

We also get a reflected moment from A New Hope as Tarkin is given word that he needs to evacuate his star destroyer because, as it turns out, lightsabers are not good for hyperdrive engine cores. Tarkin doesn't argue in this circumstance and lives to fight another day.

However, he's not happy and brings in an old friend to help deal with the fallout of the loss of the Jedi prisoner, the death of the Inquisitor, and the first coordinated effort of multiple rebel cells. Oh, come on, you don't really need me to tell you who the old friend is, do you? I'll give you a hint: I recently reviewed their first meeting during season three of Clone Wars. You can find that review here.

This was a great final episode for season one and had everything you could reasonably want as season finale. No cliffhanger, which is also good, unless you count the revelation of whom Fulcrum is and the arrival of Tarkin's pal as cliffhangers. You could make an argument for that, I suppose, though there's nothing in the specific plot that you could call a cliffhanger ending.

I'm bought in, now, and am looking forward to getting started on season two. Whenever I get around to that.

That said, I'm not going to do a season one recap. To put it simply, it got off to rather a rough start but got better as it went on, working up to several really great episodes here at the end of the season. Still, I'm not ready to say that Rebels is as good as Clone Wars. Rebels still hasn't delved into the same kinds of philosophical struggles that Clone Wars was willing to take on, which was one of the things that made Clone Wars such a strong series. Rebels is well worth watching, though.
Posted by Andrew Leon at 12:00 AM